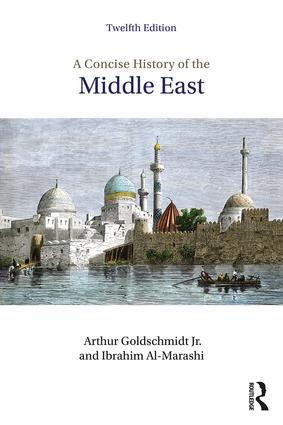 A Concise History of the Middle East

A Concise History of the Middle East provides a comprehensive introduction to the history of this turbulent region. Spanning from pre-Islam to the present day, it explores the evolution of Islamic institutions and culture, the influence of the West, modernization efforts in the Middle East, the struggle of various peoples for political independence, the Arab–Israel conflict, the reassertion of Islamic values and power, the issues surrounding the Palestinian Question, and the Middle East post-9/11 and post-Arab uprisings.

The twelfth edition has been fully revised to reflect the most recent events in, and concerns of, the region, including the presence of ISIS and other non-state actors, the civil wars in Syria and Yemen, and the refugee crisis. New parts and part timelines will help students grasp and contextualize the long and complicated history of the region.

With updated biographical sketches and glossary, and a new concluding chapter, this book remains the quintessential text for students of Middle East history.

"Arthur Goldschmidt Jr. and Ibrahim Al-Marashi have refined, updated, and ultimately revamped the scholarly edifice that Goldschmidt first crafted more than thirty-five years ago. This edition makes the complexities of Middle East’s history accessible to yet another generation of students in the light of new scholarship and momentous recent developments in the region." - Hasan Kayali, University of California, San Diego, USA.

"A clear and concise guide to the complex history of the Middle East from the rise of Islam to the fall of ISIS, Goldschmidt and Marashi have written the essential text for all newcomers to Mid-Eastern studies." - Eugene Rogan, University of Oxford, Oxford, United Kingdom.

Part I: The Rise of Islam to the Zenith of Abbasid Power

2. The Middle East Before Muhammad

3. Muhammad and the Rise of Islam

Part II: The Turkic Empires from the Seljuks to Ottomans

6. The Rise of the Shi’a and the Influx of the Turks

7. The Crusader and Mongol Invasions

11. Westernizing Reform in the Nineteenth Century

12. The Rise of Nationalism

Part IV: World War I and Its Aftermath

13. The Roots of Arab Bitterness

14. Modernizing Rulers in the Independent States

15. Egypt and the Fertile Crescent Under European Control

16. The Contest for Palestine

17. Israel’s Rebirth and the Rise of Arab Nationalism

18. War and the Quest for Peace

Part VII: The Arab Spring and its Aftermath

22. In the Season of Arab Discontent

23. The Regional Cold War in the Twenty-First Century

Arthur Goldschmidt Jr. is Professor Emeritus of Middle East History at Penn State University. He is the author of Modern Egypt: The Formation of a Nation-State, and the recipient of the Amoco Foundation Award for Outstanding Teaching and the 2000 Middle East Studies Association Mentoring Award.

is Associate Professor of Middle East History at California State University, San Marcos. He is the co-author of Iraq’s Armed Forces: An Analytical History and The Modern History of Iraq, fourth edition, with Phebe Marr.