A Decision-Makers Guide to Public Private Partnerships in Airports 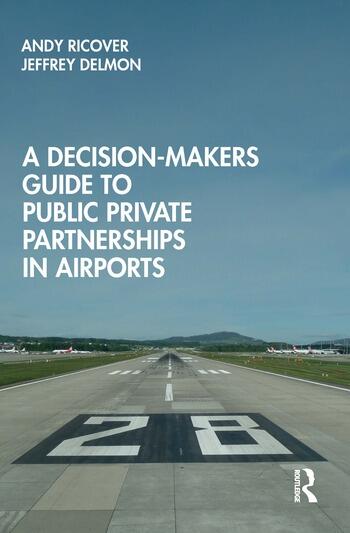 A Decision-Makers Guide to Public Private Partnerships in Airports

Airport development is critical to economic growth and poverty reduction. This book will help decision-makers assess whether Public Private Partnerships (PPP) might be a viable option to meet their airport development requirements. It walks the reader through the airport PPP process, from early preparation to bringing the project to market and managing the project during implementation. The book will help eradicate misconceptions about the role of the private sector in airport infrastructure.

A Decision-Makers Guide to Public Private Partnerships in Airports provides an essential guide for those in a position to make decisions linked to airport development, to their advisers, their staff and also to students wishing to understand airport PPP.

Andy Ricover is an air transport economist and has been advising governments on aviation economics, policy formulation, regulation, valuation and ownership reforms since 1994. He has worked in over 240 air transport projects in 92 countries for major consultancy firms, operators, bid consortiums, governments, law firms and is a regular consultant to the major development banks and agencies (World Bank Group, IDB, CAF, AfDB, EBRD, USAID, etc.). He has advised on numerous PPP processes (for airports and airlines) for the public and the private sectors from design (institutional, strategic and regulatory) through implementation (due diligence, tendering, financing). As an expert witness, Andy has provided written and oral testimony in over a dozen arbitration cases concerning airlines and airports. He is a regular speaker at conferences and is an active lecturer at universities and airport authorities.

Jeffrey Delmon has advised governments, sponsors and lenders on infrastructure finance and PPP since 1994, and has been with the World Bank since 2005. He has advised governments on airport PPP in Europe, Africa and East Asia; he was strategic adviser for the government in Saint Petersburg, Russia, for the €1.2bn Pulkovo Airport which reached financial close in 2010. Prior to joining the World Bank, Jeff spent 11 years in Paris and London advising on infrastructure and PPP projects globally at the law firms of Allen & Overy and Freshfields. He is author of numerous books, articles and blogs on PPP, and his most recent books include: Public Private Partnership Projects in Infrastructure: A practical guide for policy makers (second edition, 2017), and Private Sector Investment in Infrastructure: Project finance, PPP projects and PPP programs (third edition, 2016). He is adjunct associate professor on PPP at the National University of Singapore.