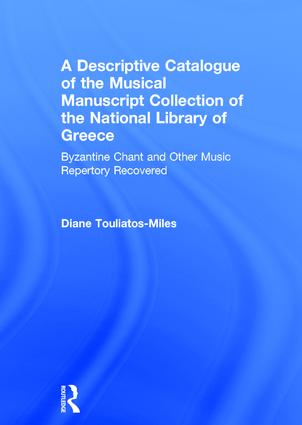 The National Library of Greece (Ethnike Bibliothike tes Ellados) is one of the richest depositories of Byzantine musical manuscripts and is surpassed by its holdings in Greece only by the multitude of manuscripts found in the monasteries of Mount Athos. In spite of being such a rich archive, the National Library has never published a catalogue of its musical manuscripts - not all of which are Byzantine or Greek. It is the purpose of this catalogue to recover or, in some instances, to present for the first time the repertory of the musical sources of the library. This project has been twelve years in the making for Professor Diane Touliatos, involving the discovery and detailed cataloguing of all 241 Western, Ancient Greek, and Byzantine music manuscripts. Not all of these are from Athens or modern Greece, but also encompass Turkey, the Balkans, Italy, Cyprus, and parts of Western Europe. This variety underlines the importance of the catalogue for identifying composers, music and performance practice of different locales. The catalogue includes a detailed listing of the contents as written in the original language as well as the titles of compositions (and/or incipits) with composers, modal signatures, other attributions and information on performance practice. Each manuscript entry includes a commentary in English indicating important highlights and its significance. There is a substantive English checklist that summarizes the contents of each manuscript for non-Greek readers. A bibliography follows containing pertinent citations where the manuscript has been used in references. There is also a glossary that defines terms for the non-specialist. Examples of some of the manuscripts will be photographically displayed. The catalogue will enlighten musicologists and Byzantinists of the rich and varied holdings of some of the most important musical manuscripts in existence, and stimulate more interest and investigation of these sources. As such, it will fill a major gap in the bibliography of Byzantine chant and other musical studies.

'Professor Touliatos-Miles’ descriptive catalogue of the musical collection of the Athens National Library fills a major gap in the field of Byzantine musical studies. The National Library’s collection of musical manuscripts is one of the most important in existence and the absence of a proper guide to it has frustrated researchers who have become accustomed to the availability of such works describing the manuscripts in other major archives. In the introduction Professor Touliatos-Miles provides a useful overview of the collection, usefully pointing out for the uninitiated some of the library’s more unusual musical items. She provides each of the individual entries with useful bibliographic references and notes. The author is to be commended for her useful set of appendices and helpful glossary, which do much to enhance the ’user-friendliness’ of this catalogue. It will be of interest to the libraries of universities and theological schools, to devotees of medieval and Byzantine musicology and liturgy, as well as to students of Western medieval, Balkan folk and Arabo-Turkish music.' Alexander Lingas, City University, London, UK '… I, and doubtless many other users of this catalogue, will be grateful that Ms Touliatos-Miles […] has made great efforts to explain rubrics and include translations into English in the body of the catalogue, plus commentaries, notes and interjections in English within the descriptions…' Reference Review 'Diane Touliatos-Miles's descriptive catalogue … is very important in both size and content, and a catalogue of [this kind] has long been a desideratum.' Journal of Plainsong and Medieval Music 'This catalogue is an indispensable navigation … [and] a must-have for any library that has a collection embracing the fascinating field of Byzantine musicology. … [A] landmark work.' Notes '… a meticulous record… The accompanying Notes�, in English, closing each entry, are clear, unaffected and ingeniously illustr

Diane H. Touliatos-Miles is Professor in the Department of Music, University of Missouri - St. Louis, USA.