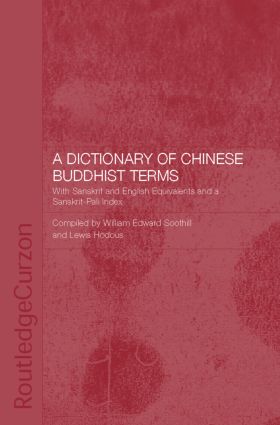 With Sanskrit and English Equivalents and a Sanskrit-Pali Index, 2nd Edition

This invaluable interpretive tool, first published in 1937, is now available for the first time in a paperback edition specially aimed at students of Chinese Buddhism.

Those who have endeavoured to read Chinese texts apart from the apprehension of a Sanskrit background have generally made a fallacious interpretation, for the Buddhist canon is basically translation, or analogous to translation. In consequence, a large number of terms existing are employed approximately to connote imported ideas, as the various Chinese translators understood those ideas. Various translators invented different terms; and, even when the same term was finally adopted, its connotation varied, sometimes widely, from the Chinese term of phrase as normally used by the Chinese.

For instance, klésa undoubtedly has a meaning in Sanskrit similar to that of, i.e. affliction, distress, trouble. In Buddhism affliction (or, as it may be understood from Chinese, the afflicters, distressers, troublers) means passions and illusions; and consequently fan-nao in Buddhist phraseology has acquired this technical connotation of the passions and illusions. Many terms of a similar character are noted in the body of this work. Consequent partly on this use of ordinary terms, even a well-educated Chinese without a knowledge of the technical equivalents finds himself unable to understand their implications.

Prefaces Method and Notes Index of Classification by Strokes List of the Chinese Radicals Chinese Characters with Radicals not Easily Identified Corrigenda A Dictionary of Chinese Buddhist Terms, Arranged According to the Number of Strokes: Chinese - Sanskrit - English; Indexes: 1. Sanskrit and Pali with Page and Column Reference to the Chinese 2. Non-Sanskrit Terms (Tibetan, etc.)