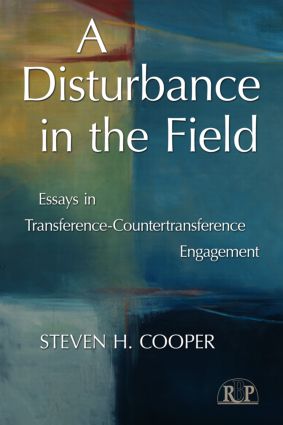 A Disturbance in the Field

The field, as Steven Cooper describes it, is comprised of the inextricably related worlds of internalized object relations and interpersonal interaction. Furthermore, the analytic dyad is neither static nor smooth sailing. Eventually, the rigorous work of psychoanalysis will offer a fraught opportunity to work through the most disturbing elements of a patient's inner life as expressed and experienced by the analyst - indeed, a disturbance in the field. How best to proceed when such tricky yet altogether common therapeutic situations arise, and what aspects of transference/countertransference should be explored in the service of continued, productive analysis?

These are two of the questions that Steven Cooper explores in this far-ranging collection of essays on potentially thorny areas of the craft. His essays try to locate some of the most ineffable types of situations for the analyst to take up with patients, such as the underlying grandiosity of self-criticism; the problems of too much congruence between what patients fantasize about and analysts wish to provide; and the importance of analyzing hostile and aggressive aspects of erotic transference. He also tries to turn inside-out the complexity of hostile transference and countertransference phenomena to find out more about what our patients are looking for and repudiating. Finally, Cooper raises questions about some of our conventional definitions of what constitutes the psychoanalytic process. Provocatively, he takes up the analyst's countertransference to the psychoanalytic method itself, including his responsibility and sources of gratification in the work. It is at once a deeply clinical book and one that takes a post-tribal approach to psychoanalytic theory - relational, contemporary Kleinian, and contemporary Freudian analysts alike will find much to think about and debate here.

"Steven Cooper is among our very finest contributors to the literature on clinical psychoanalysis. This book of essays, many of which were published previously in somewhat different form, continues the high standard he has set in his earlier work. This book is extremely valuable. In reading it I felt invigorated by its ideas and sensibility. And I was grateful to see its beneficial effects on my clinical work. This book would be of real practical use to advanced candidates, senior clinicians, and anyone interested in the analyst’s role in the psychoanalytic process." -Mitchell Wilson, International Journal of Psychoanalysis

"Besides being a great read, Steven Cooper's new book, A Disturbance in the Field, is a unique and vital contribution to the ongoing evolution of psychoanalysis as a body of knowledge and a therapeutic process. Cooper, a classically-trained relational analyst, explicitly enriches both classical and post-classical viewpoints, and by so doing, allows readers of different schools of thought to compare ideas that can find self-reflective space without compromising what already shapes a given reader's analytic identity. This same sensibility is what underlies Cooper's vision of what makes clinical psychoanalysis therapeutic, and is illustrated again and again through superlative case vignettes: To fully engage a patient's sense of self in its own terms, the analyst must be as alive to the patient's ongoing subjectivity as possible, which requires he attend to 'disturbances in the field' in which an idealization of his theory has achieved higher priority than his experiential involvement. Cooper poignantly illuminates how such moments are the pathway to enhanced permeability of the boundary between selfhood and otherness and why, in its broadest sense, the underpinning of all human development is relational." - Philip M. Bromberg, Ph.D., author, Awakening the Dreamer (2006) and Standing in the Spaces (1998)

"In every chapter of this lucid, deeply felt, thoughtful, and accessible book, Steven Cooper lays out the case that whatever clinical matter he is addressing (and the book is thoroughly clinical) is best understood by reference to multiple views, usually multiple theoretical views, each of which serves to contextualize the others. The result is far more significant and interesting than a simple eclecticism. Cooper has significant relational and contemporary Kleinian commitments, which he shares with us, and he does much more than simply advise that we pick and choose from different theories. Instead, via his concept of the pluralistic third, Cooper uses his immersion in different views to expand his clinical imagination - and ours. This is a wise and mature book." - Donnel Stern, Ph.D., Training and Supervising Analyst, William Alanson White Institute

"This outstanding volume of essays - based on the author's contributions to the first decade of the 21st century - presents an extraordinary synthesis of classical and contemporary concepts and methods of psychoanalysis, with immediate relevance to clinical practice. The author's encyclopedic knowledge of the psychoanalytic literature - masterfully cited to indicate the ideas he has adopted from others, always with generous appreciation, yet also frequently in frank disagreement without a trace of polemic - brings the reader into the exciting center of current clinical psychoanalysis. His critiques of the work of contemporary authors, explaining their contributions as well as their deficiencies, especially one-sided positions, offer a model of balance between innovation and conservation. The extensive clinical illustrations, with detailed evaluation of his participation in the analytic work and particular attention to its imperfections, form the heart of this book. Among many valuable innovations, in a triumph of clinical integrity and self-evaluation, the author cogently emphasizes the need to include the 'new bad object' along with the good. These extensive clinical discussions, more than anything else, highlight the power of the modern focus on countertransference and the analyst's contributions to the psychoanalytic dialogue." - Anton O. Kris, M.D., Clinical Professor of Psychiatry, Harvard Medical School

"…if you are relationally inclined in your own therapeutic work, then there are few guides who can make their way down the complex and convoluted rabbit hole of transference dynamics with anything like the confidence and depth of knowledge of Steven Cooper. This collection of essays feels like an engaging visit by special invitation to Cooper's consulting room, where he brings forth some of his more colorful patients and his intriguing and sometimes unexpected thoughts about the transference dynamics as they unfold." - John Soderlund, in New Therapist

Introduction: The Romance and Melancholia of Loving Psychoanalysis. The Grandiosity of Self-loathing: Transference-Countertransference Dimensions. Privacy, Reverie, and the Analyst's Ethical Imagination. An Elusive Aspect of the Analyst's Relationship to Transference. A Disturbance in the Field: The Analyst's Anticipatory Fantasies as Aid and Obstacle to the Patient's Self-integration. Psychoanalytic Process: Clinical and Political Dimensions. Good Enough Vulnerability, Victimization, and Responsibility: Why One- and Two-person Models Need One Another. The New Bad Object and the Therapeutic Action of Psychoanalysis. Franz Alexander's Corrective Emotional Experience Reconsidered. Working Through and Working Within: The Continuity of Enactment in the Termination Process.