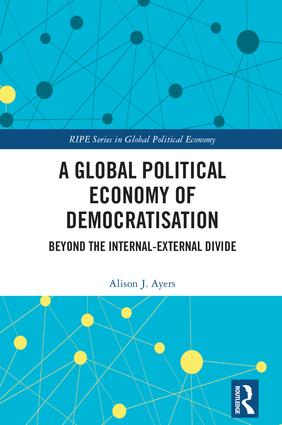 A Global Political Economy of Democratisation

Beyond the Internal-External Divide, 1st Edition

The late-twentieth century is often portrayed as an ‘Age of Democratisation’, with democracy heralded as the best of all political systems. Yet democracy has multiple meanings, values and significances. The start of the twenty-first century has witnessed a massive revival of interest in the meaning and role of democracy, not least as democracy understood in one highly particular sense has been increasingly recognised to be in crisis.

This book presents these deliberations in a new light by moving beyond the concept of the sovereign state as the dominant framework of enquiry and by rejecting the primacy of the state and the categorical separation of the ‘domestic’ and the ‘international’. Instead, Ayers elaborates an account of democratisation through the global political economy, encompassing a trenchant critique of mainstream democracy promotion in theory and practice, and opening-up possibilities for different histories of democratisation autonomous of the Western liberal and neoliberal project.

This innovative work will prove useful to scholars and students in the fields of Politics, Political Economy, International Relations, Development, African Studies, History, Geography and Sociology.

"This book offers a scholarly, clear-sighted and utterly devastating critique of Western neoliberal democratisation, and an uncompromising indictment of how its inequities impinge upon distinct countries, classes and groups. Ayers also shows in detail why and how neoliberalism must be confronted, as the only way to overcome its deepening economic and political crises. These are essential conditions for the creation of a better form of democracy, in Africa and elsewhere. A tour de force." - Alfredo Saad Filho, Professor of Political Economy, SOAS University of London.

"The West has self-identified as the arbiter of progress and the cradle of democracy. Conceptions of both progress and democracy have been inscribed into the colonial, imperial, international and global orders. This book shows that, far from forming a discourse of freedom and emancipation, democratisation has impressed and reinforced an ideological settlement of colonialism and imperialism upon the world at large. Alison Ayers provides strong evidence and argument of the international, colonial and material conditions which have formed the neo-liberal global crisis of democratisation and the global crisis of democracy. At each twist and turn, international theory or theories of democracy or African history or methodology or historiography and much more is subjected to scholarly criticism and elaboration, therein demonstrating the ideological complexity which is named 'democracy.' " - Julian Saurin, Free University, Brighton and Middle East Technical University, Northern Cyprus Campus

"A Global Political Economy of Democratisation is an exercise in reclaiming democracy and challenging orthodoxies. With passion and searing intelligence, Alison Ayers sets out to rescue democracy from its imperial pretenders. Along the way, she critically dissects neoliberal state-building projects, particularly in Africa, and reveals them to be practices of neo-colonialism. With meticulous scholarship, she makes a compelling case for retrieving African political history free from colonial biases. A Global Political Economy of Democratisation is a timely, important, and compelling book for everyone concerned about real democratic futures." - David McNally, professor of political science at York University, Toronto.

"Alison Ayers has assembled a broad-ranging and powerful critique of the effects of neoliberalism on the global democracy project. A Global Political Economy of Democratisation identifies the constraints imposed on the full promise of the democratic ideal that are profoundly embedded in the capitalist political economy: hostile to popular agency, jealous of property rights, and imperial in its very core, democratisation’s appeal quickly falls away as it travels through the world, accompanied by the economic liberalism that drives Western economic interests. Ayers reinforces this argument by identifying in detail the mechanisms that deplete democracy in Ghana and Uganda. These shallow neoliberal democracies represent a kind of historical foreclosure on the more substantive and vibrant politics of each country, a fact that provokes important discussions about the transcendence of neoliberalism and the historic potentials of Africa’s energetic political landscapes. Readable, sweeping, and provocative, this book will become a key point of reference for students and researchers alike." - Professor Graham Harrison, University of Sheffield, UK.

"This project offers a breath of fresh air because if, as Ayers says, "‘democratisation’ and ‘good governance’ interventions have directly served the neoliberal agenda," then critics of the latter who deploy these ideas need to be on guard. The different meanings of democracy promoted by grassroots activists, opportunistic politicians, the NGO industry and the imperial powers have confounded many fine scholars - but not Ayers. One reason is her thought-provoking appreciation of scale politics. This is a vital book, to be read and fought over for years to come." - Patrick Bond, Distinguished Professor of Political Economy, University of the Witwatersrand School of Governance

PART I: Theoretical and Methodological Underpinnings

1. Beyond the State We’re In: The Mutual Constitution of the Domestic and International Domains

3. ‘We All Know A Democracy When We See One’: Promulgating the Orthodox Notion of Democracy

4. Imperial Liberties: The Global Constitution of (Neo)Liberal Democracy in Africa

5. Encountering the Orthodoxy: More on the Limits and Antinomies of (Neo)Liberal Democracy