A History of States and Economic Policies in Early Modern Europe 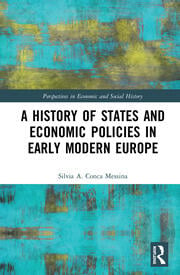 A History of States and Economic Policies in Early Modern Europe

Why was early modern Europe the starting point of the economic expansion which led to the Industrial Revolution? What was the state’s role in this momentous transformation? A History of States and Economic Policies in Early Modern Europe takes a comparative approach to answer these questions, demonstrating that wars, public finance and state intervention in the economy were the key elements underlying European economic dynamics of the era.

Structured in two parts, the book begins by examining the central issues of the state–economy relationship, including military revolution, the fiscal state and public finance, mercantilism, the formation of commercial empires and the economic war between Britain and France in the 1700s. The second part presents a detailed comparison between the different economic policies of the most important European states, looking at their unique demographic, economic, military and institutional contexts. Taken as a whole, this work provides a valuable analysis of early modern economic history and a picture of Europe’s global position on the eve of the Industrial Revolution.

This book will be useful to students and researchers of economic history, early modern history and European history.

Silvia A. Conca Messina is Assistant Professor of Economic History in the Department of Historical Studies at the University of Milan, Italy. She has published widely on Economic History and Business History in Italy and Europe from early modern to modern age. Her publications include Cotton Enterprises: Networks and Strategies. Lombardy in the Industrial Revolution, 1815–1860, Routledge, 2016 and A History of Wine Production and Consumption in Europe, 2 vols, edited with S. Le Bras, P. Tedeschi, M. Vaquero Piñeiro, 2019.