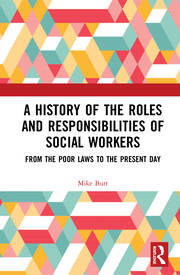 A History of the Roles and Responsibilities of Social Workers: From the Poor Laws to the Present Day

Tracing the origin of work with the ‘impotent poor’ under the Poor Laws, to social workers’ current responsibilities towards vulnerable people, this book introduces the reader to the way in which the identification of particular social problems at the end of the nineteenth century led to the emergence of a wide range of separate occupational groups and voluntary workers, which were sometimes, but increasingly, referred to as social workers.

Using an extended single chronological historical narrative and analysis, which draws heavily on original archival sources and contemporary literature, it addresses the changes which took place as part of the welfare state and the identification of common roles and responsibilities by social workers, which led to the formation of the British Association of Social Workers in 1970. The expansion of roles and responsibilities in social services departments and voluntary societies is analysed, and their significance for the development of social work is evaluated.

By highlighting the changes and continuities in these roles and responsibilities, this book will be of interest to all academics, students, and practitioners working within social work, who wish to know more about the origins of their discipline and the current state of the profession today.

Chapter 2: Social problems in the Tudor and Early Modern periods

Chapter 5: Expanding the roles and responsibilities of social workers, 1914-1939

Chapter 6: Social work during the Second World War and the introduction of the Welfare State

Chapter 11: Reviewing the roles and responsibilities of social workers

Mike Burt is Visiting Professor at the Faculty of Health and Social Care at the University of Chester where, until 2009, he was Acting Head of Social Work.

'It is great to see this – it is a comprehensive and detailed account of the development of social work in England and Wales, and is a welcome challenge to conventional histories of social work, which give too much attention to specific kinds of voluntary sector activity and not enough to the role of statutory organisations involved in work with children, older people and those with disabilities.' Viviene E. Cree, Emerita Professor of Social Work Studies, The University of Edinburgh, UK

'This book provides an excellent account of the origins and development of social work in England and Wales. Burt has used a wide range of sources to reveal details about different fields of social work at different times and in different places and has woven these together to produce a scholarly book which is also eminently readable.' Karen Lyons, PhD, CQSW, Emeritus Professor, International Social Work, London Metropolitan University, UK

'The history of social work remains incomplete so this book provides a very welcome addition to the lexicon. With its focus on the changing roles of social workers and their predecessors from the time of the Tudor Poor Laws until the present day, it provides a rich and comprehensive narrative which both outlines and critiques the changing role of the social worker in England and Wales over time in a scholarly and accessible way.' Professor Claire Chatterton, Faculty of Health and Social Care, University of Chester, UK