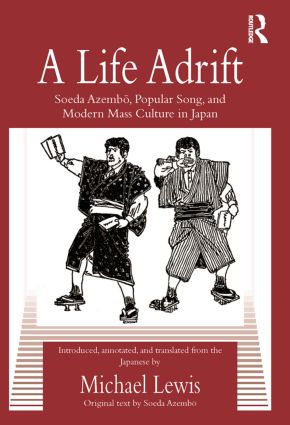 A Life Adrift, the memoir of balladeer-political activist Soeda Azembo (1872-1944), chronicles his life as one of Japan’s first modern mass entertainers and imparts an understanding of how ordinary people experienced and accommodated the tumult of life in prewar Japan. Azembo created enka songs sung by tenant farmers in rural hinterlands and factory hands in Tokyo and Osaka. Although his work is still largely unknown outside Japan, his poems and lyrics were so well known at his career’s peak that a single verse served as shorthand expressing popular attitudes about political corruption, sex scandals, spiralling prices, war, and love of motherland. As these categories attest, he embedded in his songs contemporary views on class conflict, gender relations, and racial attitudes toward international rivals. Ordinary people valued Azembo’s music because it was of them and for them. They also appreciated it for being distinctively modern and home-grown, qualities rare among the cultural innovations that flooded into Japan from the mid-nineteenth century. A Life Adrift stands out as the only memoir of its kind, one written first-hand by a leader in the world of enka singing.

'Presents a vibrant account of the world of enka during an age in which it was still new and thriving. Engaging, well translated, and replete with countless song texts composed by Azenbo and others, the book ushers the reader into a world of popular culture radically different from the current commercial music industry, steered by giant corporate conglomerates. A helpful introduction and copious notes provide socio-historical context and debunk the fables Azenbo sought to create for himself. This study constitutes a significant contribution to our knowledge of prewar Japanese culture and is likely to change most readers' image of enka and prewar Jpaanese popular music' - Gerald Groemer, Monumenta Nipponica 64:1 (2009)

"Lewis has done a first-rate job with this translation, which is replete with useful notes and illustrations. His introduction is also an extremely useful primer on both Azembo and the subject matter; brief though the section is, there are few English-language resources to match it. Summing Up: Highly recommended. All academic levels/libraries." - CHOICE, Sept. 2009 Vol. 47 No. 01

1. My Early Years 2. The Period of Soshi Politics and Political Songs 3. The Eastern Moral Reform Group 4. Before and After the Russo-Japanese War (1904-1905) 5. Enka, A New Style 6. Tasiho: an Abbreviated Record 7. Spiritual Life 8. A Pilgrim’s Account

Michael Lewis is Professor of History at Michigan State University.