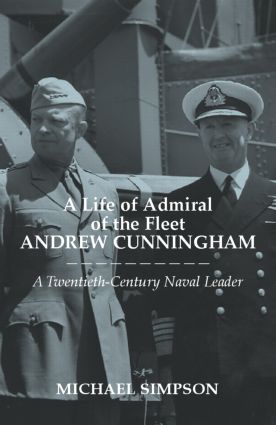 A Life of Admiral of the Fleet Andrew Cunningham

Cunningham was the best-known and most celebrated British admiral of the Second World War. He held one of the two major fleet commands between 1939 and 1942, and in 1942-43, he was Allied naval commander for the great amphibious operations in the Mediterranean. From 1943 to 1946, he was the First Sea Lord and a participant in the wartime conferences with Churchill, Stalin, Roosevelt and the US Chiefs of Staff, deliberating the global strategy for Allied victory.

He also led a very active public life for almost twenty years after his retirement in 1946. Cunningham's papers are abundant for the period 1939-63 and are supplemented here by Cabinet and Admiralty records, papers of his service contemporaries and of Churchill, and by memories of his family and friends, as well as extensive US archives and private papers.

Michael Simpson read History at Fitzwilliam College, Cambridge, and recently retired as Reader in American History at the University of Wales, Swansea. He is the Honorary General Editor of the Navy Records Society's volumes and is author of seven books, including: Franklin D. Roosevelt (1989), Anglo-American Naval Relations, 1917-1919 (1991), The Papers of Admiral of the Fleet Sir James Somerville (1995) and The Papers of Admiral of the Fleet Viscount Cunningham of Hyndhope, Vol. I: The Mediterranean Fleet, 1939--1942 (1999).