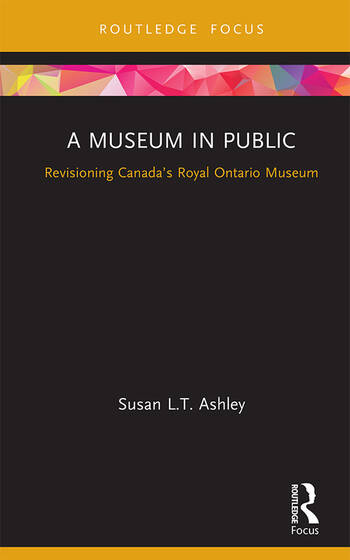 Not satisfied with the assertion that museums have taken great strides in becoming representative, relevant and open in their preoccupations, A Museum in Public contends that the supposedly public nature of their institutional role continues to be a rhetorical one. This book critically examines museums as institutions of the public sphere, questioning what assumptions are made about the publicness of their operations.

Using as a case study the Royal Ontario Museum (ROM), Canada’s largest museum, the book interrogates the public nature and political dynamics of the ROM as it completed a multi-million dollar architectural project and adopted a new vision of the museum. Providing an engaged cultural analysis of how publicness is reflected in the attitudes and behaviours of management, staff and visitors, Ashley claims that museums often function as a boundary zone between the needs and concerns of the public and ideas of publicness that serve corporate and managerial interests and practices. Asking the reader to seriously consider whether the ideals of contact zone and engagement are practically possible within an administrative setting, the book offers insights into how museums might achieve political publicness through transparent, open and democratic communicative action.

A Museum in Public

1. Boundary Zone
2. Publicness, Public Institutions and the Public Interest
3. Renaissance and the ROM In Public

Part 2 THE ROM IN PUBLIC

8. Revisioning Publicness at the ROM

is Senior Lecturer in Creative and Cultural Industries Management and AHRC Leadership Fellow in (Multi)Cultural Heritage at Northumbria University, Newcastle upon Tyne, UK. She is a cultural studies scholar interested in what, how, and why heritage knowledge is created, shaped, communicated, and consumed in the public sphere. Dr Ashley has published widely, including Diverse Spaces: Identity, Heritage and Community in Canadian Public Culture (2013). She has 20 years of experience with culture and heritage sites across Canada.

"By attending closely to the goings-on in a single, iconic institution, Susan Ashley’s rich and insightful analysis deftly reveals not only how cultural organisations are inevitably enmeshed in the wider world but also the exciting possibilities that new ways of conceiving of their publicness might hold for museums of all kinds as they seek to enhance their relevance and value in the twenty first century."

"A Museum in Public is a compelling and critical portrait of the Royal Ontario Museum in Toronto, circa 2008, at the moment of its multi-million dollar renaissance, which included a spectacular architectural facelift and the promise of a global meeting ground, an agora for all. Combing institutional analysis with ethnographic fieldwork, Ashley shows how lofty rhetoric outpaced action, and corporate cultural norms infiltrated most areas of public service. A Museum in Public demonstrates the layers of analysis needed to see through the emperor’s new clothes, and to understand the workings of privilege, even as it is democratized. The book also offers glimpses of ways in which publics (including museum employees) carve out spaces of sociability and freedom in the museum. This is a welcome contribution to museum studies, and to the ongoing study of Canada’s largest museum."