A People's History of the United States
1492-Present 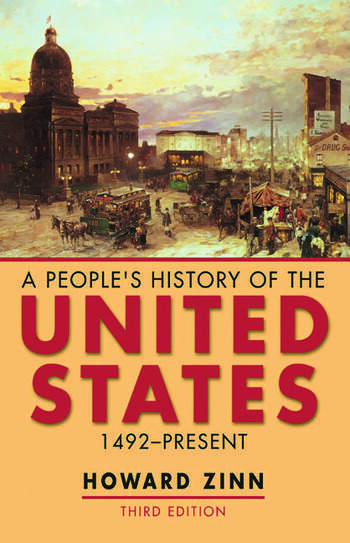 A People's History of the United States: 1492-Present

This is a new edition of the radical social history of America from Columbus to the present.

This powerful and controversial study turns orthodox American history upside down to portray the social turmoil behind the "march of progress".

Known for its lively, clear prose as well as its scholarly research, A People's History is the only volume to tell America's story from the point of view of - and in the words of - America's women, factory workers, African-Americans, Native Americans, the working poor, and immigrant laborers. As historian Howard Zinn shows, many of America's greatest battles - the fights for fair wage, an eight-hour workday, child-labor laws, health and safety standards, universal suffrage, women's rights, racial equality - were carried out at the grassroots level, against bloody resistance. Covering Christopher Columbus's arrival through the Clinton years A People's History of the United States, which was nominated for the American Book Award in 1981, is an insightful analysis of the most important events in US history.

1. Columbus, the Indians, and Human Progress.
2. Drawing the Color Line.
3. Persons of Mean and Vile Condition.
4. Tyranny is Tyranny.
5. A Kind of Revolution.
6. The Intimately Oppressed.
7. As Long as Grass Grows or Water Runs.
8. We Take Nothing by Conquest, Thank God.
9. Slavery Without Submission, Emancipation Without Freedom.
10. The Other Civil War. 11. Robber Barons and Rebels.
12. The Empire and the People.
13. The Socialist Challenge.
14. War is the Health of the State.
15. Self-help in Hard Times.
16. A People's War? 17. "Or Does It Explode?"
18. The Impossible Victory: Vietnam.
19.Surprises.
20.The Seventies: Under Control?
21. Carter-Reagan-Bush: The Bipartisan Consensus.
22. The Unreported Resistance.
23.The Coming Revolt of the Guards.
24. The Clinton Presidency.
Afterword.
Bibliography.
Index.

was formerly a Professor of Political Science at the University of Boston.

"Zinn has written a brilliant and moving history of the American people from the point of view of those who have been exploited politically and economically and whose plight has been largely omitted from most histories. â€¦the book is an excellent antidote to establishment history. Seldom have quotations been so effectively used; the stories of blacks, women, Indians, and poor laborers of all nationalities are told in their own words. While the book is precise enough to please specialists, it should satisfy any adult reader."

"â€¦he tells an important and neglected part of the truth"

"â€¦he succeeds admirably in his second objective of 'disclosing those hidden episodes of the past when, even if in brief flashes, people showed their ability to resist, to join together, occasionally to win'"

"Professor Zinn writes with an enthusiasm rarely encountered in the leaden prose of academic history, and his text is studded with telling quotations from labor leaders, war resisters and fugitive slaves."