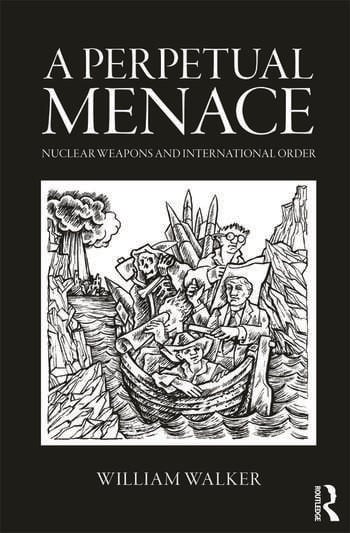 Written by a leading scholar in the field of nuclear weapons and international relations, this book examines ‘the problem of order’ arising from the existence of weapons of mass destruction.

This central problem of international order has its origins in the nineteenth century, when industrialization and the emergence of new sciences, technologies and administrative capabilities greatly expanded states’ abilities to inflict injury, ushering in the era of total war. It became acute in the mid-twentieth century, with the invention of the atomic bomb and the pre-eminent role ascribed to nuclear weapons during the Cold War. It became more complex after the end of the Cold War, as power structures shifted, new insecurities emerged, prior ordering strategies were called into question, and as technologies relevant to weapons of mass destruction became more accessible to non-state actors as well as states.

William Walker explores how this problem is conceived by influential actors, how they have tried to fashion solutions in the face of many predicaments, and why those solutions have been deemed effective and ineffective, legitimate and illegitimate, in various times and contexts.

Prologue  1. Introduction: The Problem of International Nuclear Order  and Their Understanding  2. The Awakenings, 1939-46  3. Sculpting an Order out of Disorder: Nuclear Weapons and the Cold War  4. Two Crises of Nuclear Order, 1973-1986  5.The Nuclear Order’s Consolidation, 1986-1997  6. Into a Second Nuclear Age? Shifting and Expanding Problems of Nuclear Order, 1997-2007  7. Back to Nuclear Disarmament and the NPT's Invigoration  8. Heading for the Rocks?

William Walker is Professor of International Relations at the University of St Andrews. His research interests include nuclear politics and the governance of technology.

'Walker makes a significant contribution to the argument for an international nuclear order from the English School perspective. Summing Up: Recommended. General readers; graduate students through professionals.' - Choice, June 2012

'This excellent book makes an important contribution to the scholarly debate on the future of nuclear weapons. This timely book makes a unique contribution to the literature on the nuclear danger and the prospects for survival of the NPT-centred international nuclear order. It is highly recommended for scholars and practitioners, and is an invaluable resource for graduate courses on nuclear arms control and disarmament and American foreign policy.' - Mario E. Carranza, Contemporary Security Policy, Vol. 33, 1, April 2012

'Walker surveys this poorly covered niche with breadth and without academic jargon in a work intended for an audience of general readers as well as practitioners and academic peers. Walker has opened the doors to many interesting rooms worth exploring.' - Michael Krepon, Arms Control Today, March 2012

'William Walker has done something special, compelling and persuasive. Perpetual Menace combines political science rigor with literary sensibility. The book is much more than another history of the nuclear era. Rather it is an innovative search for  the impact of nuclear capabilities on global political stability. The result is not just original and enlightening, but surprisingly engaging and enjoyable.' - Aaron Karp, Old Dominion University, USA

'William Walker is one of the world's most thoughtful analysts of nuclear-proliferation issues, known for combining, with intellectual ease, historical perspectives and philosophical insights. As usual, Walker writes with elegance, and [A Perpetual Menace] includes many valuable insights on various questions of nuclear history.' - Bruno Tertrais, Survival, Vol. 54, 1, Feb-Mar 2012

‘William Walker masterfully conceptualizes the ways in which states since 1945 have struggled to order their relations with each other and nuclear weapons.  Valuable as history, international relations theory, and contemporary politics, this wise book concludes that the “logic of restraint” is the most feasible common ground on which all states could build a beneficial nuclear order today.’ - George Perkovich, Carnegie Endowment for International Peace, Washington DC

‘William Walker’s depiction of mankind on a 21st century “Ship of Fools,” in danger of a nuclear shipwreck and sorely in need of savvy pilot, is frighteningly apt. Although his elegantly written new volume does not point to a single lodestar as a guide to safety, it helps us better appreciate the perilous waters we have traveled and the instruments at our disposal to stay afloat.’ - William Potter, Monterey Institute of International Studies, USA

‘Walker is the only author who has really thought through the relationship between nuclear weapons and international order. His book contains a compelling historical narrative as well as a wealth of illuminating conceptual distinctions. It combines a strong and anxious moral concern with a thorough and realistic appraisal of the various possible strategies for dealing with the "perpetual menace’’ of nuclear weapons. I cannot think of a more timely and complete work on this crucial subject.' -- Pierre Hassner, Centre d'Etudes et de Recherches Internationales (CERI), Paris

‘This book is a terrific achievement and fills a gap in the literature on international nuclear politics.  By expertly weaving his theme of order through the historical, political, and strategic evolution of the contemporary international nuclear order, Walker has produced a book which speaks centrally to the perennial challenge of how to manage the threat to humanity’s survival posed by the splitting of the atom. It is written in a highly accessible manner, and yet with a level of sophistication and authority which will lead to scholarly acclaim.’ -- Nicholas Wheeler, Aberystwyth University, Wales

‘In a subtle analysis of the history of the nuclear order, Walker charts the stresses and strains to which the system has been subjected.’ -- Lawrence D. Freedman, Foreign Affairs, Vol. 91, No. 3. May/June 2012 issue

‘William Walker’s book on nuclear weapons and international order is one of the most important additions to the nuclear literature of the past decade. Its main scholarly contributions, which are likely to ensure that it becomes a core academic text, lie in its novel conceptual framework and breadth of analysis, which help define the nuclear order and chart state-led efforts to shape it from the early 1940s to the present day. By anyone’s standards, this is an ambitious undertaking, requiring intellectual sophistication and an almost encyclopedic knowledge of nuclear developments over a period of more than seventy years. But Walker is equipped for the task: he is drawing on a lifetime of scholarship on nuclear issues, bringing historical depth, clarity, and substance to his analysis.’ - Tanya Ogilvie-White, The Nonproliferation Review, February 2013