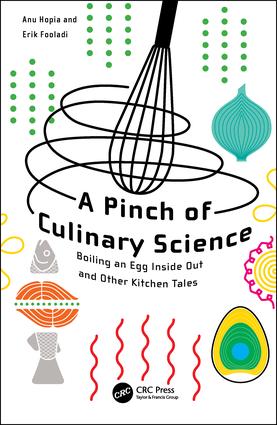 A Pinch of Culinary Science

Boiling an Egg Inside Out and Other Kitchen Tales, 1st Edition

This book provides a playground for the readers to practice and develop scientific thinking, by exploring the world of food in a fun way. The authors take the role of someone trying to find interesting questions to ask about familiar, though often hidden, phenomena. Claims (or myths) on everyday cooking provide numerous cases for this. Using popular cooking myths as a springboard, this book discusses these riddles, interweaving a scientific rationale for the phenomena with a culinary or craftsman explanation. This book covers not only science (physics, chemistry, biology) but also cultural aspects (tradition, history, emotion), of what food/cooking is all about.

is Professor and research director of food development with special focus on molecular gastronomy. Currently she works as a professor of food development at University of Turku. She earned her PhD Thesis at University of Helsinki during 1990-1994. After that she joined University of California Davis for post doctoral year and continued as a senior scientist at Univ Helsinki until 2000 when she joined Raisio Plc. In addition, she have worked as associate professor at Univ helsinki since 1996. In Raisio she worked first in R&D for 5 years as R&D director of the Raisio Benecol business unit and then moved to international sales for another 3 years.

, is Associate professor at Volda University College, University of Oslo, where he Specializes in Chemistry, food, molecular gastronomy, education, science education. He earned his PhD at the University of Oslo. He developed The Kitchen Stories project, and interdisciplinary network of culinary claims, that enables learning science through food - learning food through science.