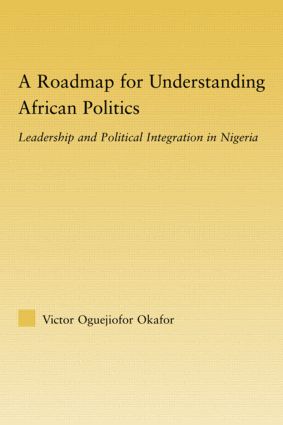 A Roadmap for Understanding African Politics

This book examines the impact of post-colonial leadership on political integration in Nigeria, offering an in-depth understanding of the historical and contemporary forces that shape Nigeria's national politics as well as African politics generally. Okafor discusses how Nigeria's pre-colonial and colonial political histories along with contemporary external forces like neo-colonialism, as well as internal social, economic and political structures and developments, have affected emerging post-independence politics in the country. The study climaxes with an Africa-centered theory of political and integrative leadership and then uses it as a prism for analyzing six Nigerian post-independence political leaderships, encompassing Nigeria's First and Second Republics, along with their military interregna. The concluding chapter includes a discussion of the implications of the study for leadership and political integration in Africa in general.

"This work is a credible addition to the large and growing body of literature on political and intellectual history of Africa. It will surely stand the test of time."

Victor Oguejiofor Okafor is a Professor of African American Studies at Eastern Michigan University. His publications include Towards an Understanding of Africology (2002), Studies in African American Leadership: Individuals, Movements, and Committees, chapters in several anthologies, and scholarly articles in numerous journals, magazines, and newspapers.