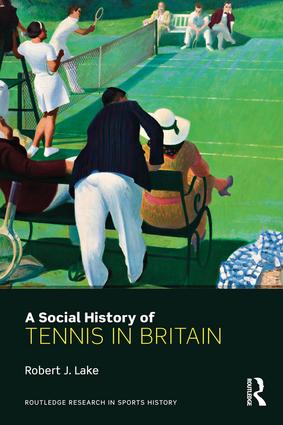 A Social History of Tennis in Britain

Winner of the Lord Aberdare Literary Prize 2015- from the British Society for Sports History.

Since its emergence as a spare-time diversion for landed elites, the dominant culture in British tennis has been one of amateurism and exclusion, with tennis sitting alongside cricket and golf as a vehicle for the reproduction of middle-class values throughout wider British society in the twentieth and twenty-first centuries. Consequently, the Lawn Tennis Association has been accused of a failure to promote inclusion or widen participation, despite steadfast efforts to develop talent and improve coaching practices and structures. Robert Lake examines these themes in the context of the global development of tennis and important processes of commercialisation and professional and social development that have shaped both tennis and wider society.

The social history of tennis in Britain is a microcosm of late-nineteenth and twentieth-century British social history: sustained class power and class conflict; struggles for female emancipation and racial integration; the decline of empire; and, Britain’s shifting relationship with America, continental Europe, and Commonwealth nations. This book is important and fascinating reading for anybody with an interest in the history of sport or British social history.

'Whilst tennis has had ample attention in sports history literature, there has remained a conspicuous absence of such a sustained, comprehensive volume on tennis. There is now an essential account for anyone considering embarking on a study on tennis. Also, anyone giving serious consideration to issues of gender, class, or ethnicity in Britain's social history will also benefit from this work, and find the vivid examples and fervent discussions within the tennis context valuable. These elements all helped to capture the imagination and retain the attention, which made for a genuinely gratifying read. There is no jargon or dwelling on unnecessary detail; so the book remains suitable for any reader and will engross the historian, the sociologist, and the tennis enthusiast equally', Adam Benkwitz, International Journal of the History of Sport

‘Lake’s achievement is to provide the first, much-needed, detailed overview of the social history of British lawn tennis from the Victorian period to the present day. By tracing the evolution of the game and placing it within a broader context, the author sheds light on several wider themes, including the relationship between sport and the nation’s changing place on the world stage and the rise of professionalism and commercialism in the second half of the twentieth century’, Kevin Jefferys, Sport in History

'Lake blends a reconstructionist's rigor in recounting the sport's early days with a constructionist's articulative imagination in effectively linking the evolution of tennis with broader political, social, and economic formations in modern Britain (and beyond). The book is rich with nuanced accounts of how specific codes, rules, organizations, and identities worked in dialectic cadence with gender and race politics, class power, fading colonial structures, and burgeoning commercial imperatives. As a representation of history, this book will serve the student of British sport culture well in capturing the political impulses that shaped the game's development. Summing Up: Recommended', J. Newman, CHOICE Reviews, June 2015

'At every stage, Lake manages to place what was going on in tennis in the wider context of social, cultural, political, and economic developments, and also makes links between tennis and other sports, especially in relation to themes such as commercialism and professionalism. We have waited a long time for a book such as this, and I am confident that Lake’s work will fill the gap in the historiography of British sport …', Martin Polley, Director of the International Centre for Sports History and Culture, De Montfort University, UK

'A fascinating, comprehensive history of British tennis, providing a detailed analysis of tennis's place in, and influence on, wider British society while also examining the leading role Britain played in the development of the game world-wide', Marcus Hunt, MA Sport, Culture and Society

'One of the book’s strengths is its breadth of coverage… not only historians of sport but historians more generally will gain much from Lake’s careful, in- depth and analytical study which provides a deep and nuanced understanding of tennis in Britain.', Mike Huggins, University of Cumbria, Journal of Sport History

1. The Emergence of Lawn Tennis in Late-Nineteenth-Century Britain 2. Representations of Social Class and Gender in Early Lawn Tennis Playing Styles, Etiquette and Fashions 3. Clubs, Tournaments and "Pot-Hunting" in Pre-War Lawn Tennis 4. The LTA’s Struggle for Legitimacy: Early Efforts in Talent Development, Coaching and the Retention of Amateurism 5. British Tennis as an Imperial Tool: International Competitions, Racial Stereotypes and Shifting British Authority 6. Reconciliation and Consolidation: Early Struggles for British Lawn Tennis in the Aftermath of War 7. Advances for Women and Children amidst British Decline 8. Interwar Developments in Club/Recreational Tennis 9. Lenglen, Tilden and the 'Amateur Problem' in Lawn Tennis 10. Developments for Professional Coaches and the Early (Failed) Push for 'Open' Tournaments 11. New British Success and Renewed Issues of Amateurism in the 1930s 12. Early Post-War Recovery Efforts in British Tennis 13. Shifting Attitudes toward Talent Development, Coaching, Commercialism and Behavioural Etiquette in Post-War British Tennis 14. The Enduring Amateur-Professional Dichotomy and the New Struggle for Authority in World Tennis 15. "All Whites" at Wimbledon? The Achievements of Gibson, Ashe and Buxton amidst Shifting Race Relations in Britain 16. Persistent Struggles for Women in Post-war Tennis 17. Nationalism, Commercialism and Cultural Change at Wimbledon Conclusion: Continuity and Change in the Social History of Tennis in Britain and Future Directives for the LTA

Robert J. Lake is a faculty member in the Department of Sport Science at Douglas College, Canada. His research focuses chiefly on the history and sociology of tennis, particularly related to social class, gender, nationalism, social exclusion, coaching and talent development

The Routledge Research in Sports History series presents leading research in the development and historical significance of modern sport through a collection of historiographical, regional and thematic studies which span a variety of periods, sports and geographical areas. Showcasing ground-breaking, cross-disciplinary work from established and emerging sport historians, the series provides a crucial contribution to the wider study of sport and society.