A Taste for Empire and Glory
Studies in British Overseas Expansion, 1600–1800 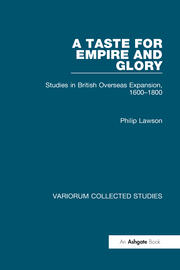 A Taste for Empire and Glory: Studies in British Overseas Expansion, 1600–1800

In the decade and a half before his untimely death at 46, Philip Lawson had already achieved more than many historians. This posthumously published collection brings together his work on the British overseas expansion during the ’long’ 18th century and includes two previously unpublished essays. The first articles deal with general issues of approach and interpretation, with Canada and the thirteen colonies, and with India and the empire of tea. The final essays illustrate Anglo-Indian relations and the tea trade, showing the relationship between the establishment of Indian tea plantations, the growth of the tea trade, and the political and cultural impact of tea drinking on the British and their colonists. Taken together these studies make an outstanding contribution to the field, important to anyone interested in the history of Hanoverian Britain as an imperial power.

Contents: Philip Lawson’s major publications, 1980-1995; The missing link: the imperial dimension in understanding Hanoverian Britain; Hanoverian studies: the impact of recent trends on parliamentary history; ’Arts and empire equally extend’: tradition, prejudice and assumption in the 18th-century press coverage of empire; ’The Irishman’s prize’: views of Canada from the British press, 1760-1774; A perspective on British history and the treatment of Quebec; ’Sapped by corruption’: British governance of Quebec and the breakdown of Anglo-American relations on the eve of revolution; George Grenville and America: the years of opposition 1765-1770; British traditions and revolutionary America; Anatomy of a civil war: new perspectives on England in the age of the American Revolution, 1767-82; Parliament and the first East India Inquiry, 1767; Robert Clive, the ’black jagir’, and British politics; ’Our Execrable Banditti’: perceptions of Nabobs in mid 18th-century Britain; Sources, schools and separation: the many faces of parliament’s role in Anglo-American history to 1783; Tea, vice and the English state, 1660-1784; Women and the empire of tea: image and counter-image in Hanoverian England; Index.

'Historians of Hanoverian Britain and its empire will welcome this volume....' International History Review, Vol. XXI, No. 4 'By bringing together many of Lawson’s articles and essays, this volume serves a very useful purpose. It is an important book and deserves a broad readership.' Reviews in History