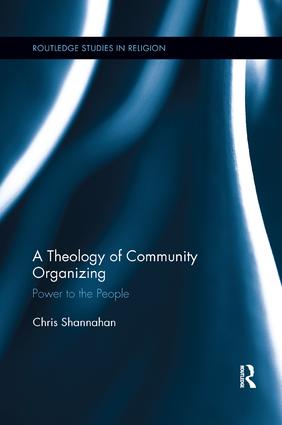 A Theology of Community Organizing

Power to the People, 1st Edition

The rising importance of community organizing in the US and more recently in Britain has coincided with the developing significance of social movements and identity politics, debates about citizenship, social capital, civil society, and religion in the public sphere. At a time when participation in formal political process and membership of faith groups have both declined dramatically, community organizing has provided a new opportunity for small community groups, marginalized urban communities, and people of faith to engage in effective political action through the developments of inter-faith and cross-cultural coalitions of groups. In spite of its renewed popularity, little critical attention has been paid to community organizing.

This book places community organizing within debates about the role of religion in the public sphere and the rise of public theology in recent years. The book explores the history, methodology, and achievements of community organizing, engaging in a series of conversations with key community organizers in the US and Britain. This volume breaks new ground by beginning to articulate a cross-cultural and inter-faith ‘Theology for Community Organizing’ that arises from fresh readings of Liberation Theology.

"This monograph offers an exemplary practical theological reflection, using the pastoral cycle to think through the experience of community organising and how it links with social and political theory, as well as with theological concepts… this monograph is very stimulating, and well worth a close read." - Jack Barentsen, ETF in Leuven, in Journal of Empirical Theology

Chris Shannahan is a Research Fellow in Urban Theology at the University of Birmingham and Director of the University’s Urban Religion Community Education Programme. He worked previously as an inner city Methodist Minister for sixteen years. He is actively involved in a range of community development projects in Birmingham. He has taught Urban and Practical Theology at the Queens Foundation for Ecumenical Theological Education, the University of Birmingham and Newman College University in Birmingham and spoken at conferences held by the Iona Community, the Progressive Christianity Network, the Institute for Urban Theology and the Association of American Geographers. He has recently launched a Metropolitan Religion Study group at the University of Birmingham aimed at graduates in the West Midlands and a community centred Urban Theology Forum. His first book, Voices from the Borderland (2010), provided a critical exploration of contemporary urban theologies and called for the development of a new interdisciplinary and cross-cultural pattern of urban theology that is more attuned to the complex and interrelated fluid urban world of the twenty-first century.