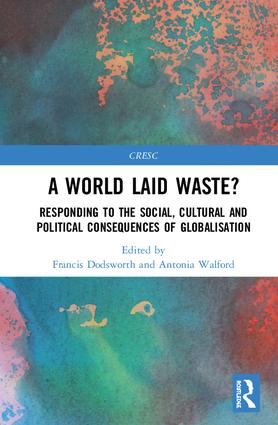 Responding to the Social, Cultural and Political Consequences of Globalisation, 1st Edition

Globalisation and neo-liberalism have seen the rise of new international powers, increasingly interlinked economies, and mass urbanisation. The internet, mobile communications and mass migration have transformed lives around the planet. For some, this has been positive and liberating, but it has also been destructive of settled communities and ways of living, ecologies, economies and livelihoods, cultural values, political programmes and identities. This edited volume uses the concept of waste to explore and critique the destructive impact of globalisation and neo-liberalism.

By bringing to bear the distinct perspectives of sociologists of class, religion and culture; anthropologists concerned with infrastructures, material waste and energy; and analysts from accounting and finance exploring financialization and supply chains, this collection explores how creative responses to the wastelands of globalisation can establish alternative, at times fragile, narratives of hope. Responding to the tendency in contemporary public and academic discourse to resort to a language of the ‘laid to waste’ or ‘left behind’ to make sense of social and cultural change, the authors of this volume focus on the practices and rhetorics of waste in a range of different empirical settings to reveal the spaces for political action and social imagination that are emerging even in times of polarisation, uncertainty and disillusionment.

This inter-disciplinary approach, developed through a decade of research in the ESRC Centre for Research on Socio-Cultural Change (CRESC), provides a distinctive perspective on the ways in which people in very different social and cultural contexts are negotiating the destructive and creative possibilities of recent political and economic change.

1. Must Brexit be a waste? Economic policies for a disunited kingdom

2. ‘The Ghosts of Class’: Space, Waste and Hope in the Ex-Industrial North’

4. Coping with Change: Community, Environment, and Engagement in a London Buddhist Community

5. A Waste of Energy? Traversing the Moral Landscape of Energy Consumption in the UK

Francis Dodsworth is Senior Lecturer in Criminology at Kingston University, London, where he has taught criminology and sociology since 2014. Previously, he worked for ten years in the ESRC Centre for Research on Socio-Cultural Change (CRESC) at The Open University. During that time, he published in several fields ranging from the history of crime, policing and personal protection to the history of architecture and urban improvement and contemporary and historical religious cultures.

is a Teaching Fellow in Digital Anthropology at University College London, and a Post-Doctoral Research Associate at the Centre for Social Data Science (SODAS), University of Copenhagen. Previously, she was a Research Associate in the ESRC Centre for Research on Socio-Cultural Change, in the Social Life of Methods. Her work explores the effects of the exponential growth of digital data on social and cultural imaginaries and practices, focusing particularly on large-scale digitisation in the environmental sciences.