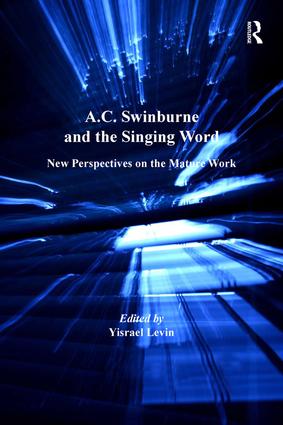 A.C. Swinburne and the Singing Word

Focusing on Algernon Charles Swinburne's later writings, this collection makes a case for the seriousness and significance of the writer's mature work. While Swinburne's scandalous early poetry has received considerable critical attention, the thoughtful, rich, spiritually and politically informed poetry that began to emerge in his thirties has been generally neglected. This volume addresses the need for a fuller understanding of Swinburne's career that includes his fiction, aesthetic ideology, and analyses of Shakespeare and the great French writers. Among the key features of the collection is the contextualizing of Swinburne's work in new contexts such as Victorian mythography, continental aestheticism, positivism, and empiricism. Individual essays examine, among other topics, the dialect poems and Swinburne's position as a regional poet, Swinburne as a transition figure from nineteenth-century aesthetic writing to the professionalized criticism that dominates the twentieth century, Swinburne's participation in the French literary scene, Swinburne's friendships with women writers, and the selections made for anthologies from the nineteenth century to the present. Taken together, the essays offer scholars a richer portrait of Swinburne's importance as a poet, critic, and fiction writer.

'… the new contexts offered for reading Swinburne are particularly useful, and will play a key role in enhancing understandings of his work and its diverse concerns more broadly.' Victoriographies 'These essays continue energetically and compellingly the critical and scholarly efforts dedicated to Swinburne over the past half century. That he still lingers on the periphery of the canon reflects the volatility of critical judgement in our age - consensus on the expanded number of authors and works in play is still unsettled. When Swinburne’s time comes, this collection will have played a role in helping to beat back ill-informed neglect and bringing to readers’ attention some less familiar writing and new contexts for reading it.' Notes and Queries 'A.C. Swinburne and the Singing Word […] provides an exciting wealth of insights to advance the cause of this still-marginalized writer… Levin’s collection is an immensely valuable one, and it will no doubt inspire increased interest in poetry from all stages of Swinburne’s career.' Victorian Studies

Yisrael Levin teaches English at the University of Victoria, Canada.