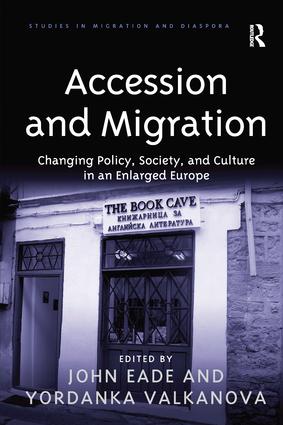 The expansion of the European Union in May 2004 through the entry of ten countries from Central and Eastern Europe, has generated considerable media interest - interest which was revived by further expansion in January 2007 when Bulgaria and Romania became the latest nations from the east to join. Rather than focus exclusively on changes within the EU labour market and related policy debates, this book offers a careful, grounded analysis of the social and cultural processes bound up with migration flows between Britain and Bulgaria, placing these flows in the wider European perspective. As such, Accession and Migration will be of interest not only to migration scholars but also to policy makers at local, national and international levels.

'This volume is a vital contribution to the growing body of research into post-EU enlargement migration, closely analysing the hitherto neglected phenomenon of eastward, as well as westward, migration within Europe. Through a range of fascinating Bulgarian and British case-studies, Accession and Migration sheds light on the complexities of post-enlargement migration, highlighting especially the vulnerabilities, anxieties and inequalities embedded within these movements.' Kathy Burrell, De Montfort University, UK ’This important contribution to the understanding of the new wave of European migrations provides interesting answers to the question that intrigues Bulgarian citizens: why, when many of their co-nationals seek to settle in the UK, some British are attracted to move to Bulgaria - an interdisciplinary and insightful analysis, providing complementary Western and Eastern perspectives on East-West and West-East migrations.’ Anna Krasteva, New Bulgarian University, Bulgaria

Contents: Introduction, John Eade and Yordanka Valkanova; Section 1 Policies Towards Migration: Social, Economic and Cultural Dynamics: Cultural Patterns of the EU: ’Eastern Enlargement’ - between post-socialism and the ’longue durée’ of history?, Andreas Pribersky; The contemporary development of the Bulgarian policy towards migration, 2006-2007, Daryana Kotzeva; Stemming the flow? The causes and consequences of the UK’s ’closed door’ policy towards Romanians and Bulgarians, Dhananjayan Sriskandarajah and Laurence Cooley. Section 2 Going East: The British in Bulgaria: Property and transnational neoliberalism: the case of British migration to Bulgaria, Deema Kaneff; From foreigner to neighbour: a Standart view of the changing patterns of communication with British settlers in Bulgaria, Irina Chongarova; Britons in the Bulgarian countryside: social and cultural aspects of adaptation and intercommunication, Zhivko Ivanov. Section 3 Going West: The Bulgarians and Other 'New' Europeans in Britain: Bulgarian immigrants and community cohesion in London and Brighton, Eugenia Markova; Being a rara avis: the educational experiences of Bulgarian children in Great Britain, Yordanka Valkanova; Settling or surviving in London? The experience of Poles and other 'A8' migrants in a global city borough, John Eade and Michal P. Garapich; References; Index.

Series now in its 20th year

Studies in Migration and Diaspora is a series designed to showcase the interdisciplinary and multidisciplinary nature of research in this important field. Volumes in the series cover local, national and global issues and engage with both historical and contemporary events. The books will appeal to scholars, students and all those engaged in the study of migration and diaspora. Amongst the topics covered are minority ethnic relations, transnational movements and the cultural, social and political implications of moving from 'over there', to 'over here'.

For a limited time only, get 20% off the series with discount code ET20*

* Offer cannot be used in conjunction with any other offer or discount and only applies to books purchased directly via our website.