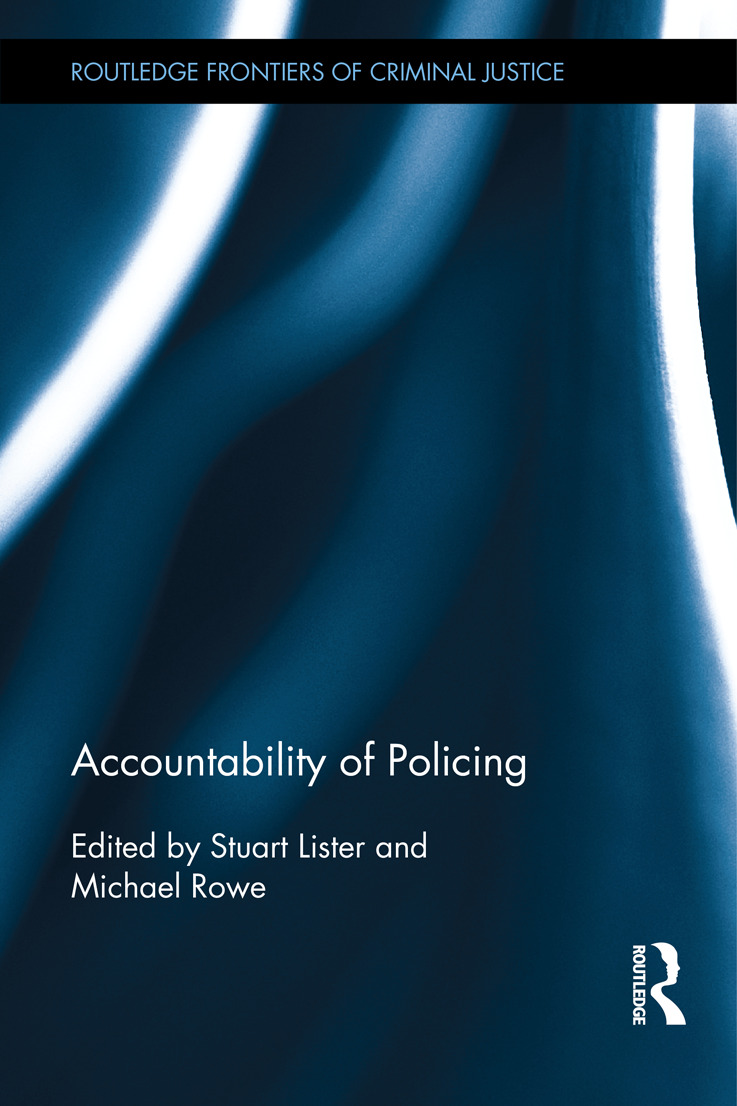 Accountability of Policing provides a contemporary and wide-ranging examination of the accountability and governance of ‘police’ and ‘policing’. Debates about ‘who guards the guards’ are among the oldest and most protracted in the history of democracy, but over the last decade we have witnessed important changes in how policing and security agencies are governed, regulated and held to account. Against a backdrop of increasing complexity in the local, national and transnational landscapes of ‘policing’, political, legal, administrative and technological developments have served to alter regimes of accountability. The extent and pace of these changes raises a pressing need for ongoing academic research, analysis and debate.

Bringing together contributions from a range of leading scholars, this book offers an authoritative and comprehensive analysis of the shifting themes of accountability within policing. The contributions explore questions of accountability across a range of dimensions, including those ‘individuals’ and ‘institutions’ responsible for its delivery, within and between the ‘public’ and ‘private’ sectors, and at ‘local’, ‘national’ and ‘transnational’ scales of jurisdiction. They also engage with the concept of ‘accountability’ in a broad sense, bringing to the surface the various meanings that have become associated with it and demonstrating how it is invoked and interpreted in different contexts.

is essential reading for academics and students involved in the study of policing, criminal justice and criminology and will also be of great interest to practitioners and policymakers.

‘This book makes a significant contribution to the literature on accountability for policing in three particular ways. First, it adopts much broader conceptions of both accountability and "policing" than have been evident in almost all the previous literature on this topic. Second, it is historically grounded, which enhances understanding of where things stand today. Thirdly, it is thoroughly up to date, exploring new conceptual frames, the most recent developments, and the most recent critiques. For all these reasons, it is a book that should be read by anyone who is interested, for whatever reasons, in its central subject.’ - Philip C. Stenning, Professor of Criminology and Criminal Justice, Griffith University, Queensland, Australia

‘Accountability of Policing is a sorely-needed text in the policing research cannon. Lister and Rowe, along with a long list of well-respected scholars in this field, have compiled an informative and insightful text on a topic of great interest in policing. It will be a valuable resource for students, researchers and practitioners.’ - Megan O’Neill, Lecturer in Human Geography, University of Dundee and the Scottish Institute of Policing Research, UK

‘Focusing on such diverse subjects as corruption, complaints, and stop and search, and bringing together the leading authors in their respective fields, this impressive volume offers the most up-to-date analysis of the contemporary state of accountability in policing and private security. This will be essential reading for teachers and students of policing.’ - Tim Newburn, Professor of Criminology and Social Policy, London School of Economics, UK

"Composed of eleven chapters from an impressive line-up of established and well-respected scholars in the field, Lister and Rowe’s (2015) edited collection on the Accountability of Policing is a much welcome addition to the literature. Set against a backdrop of considerable and ongoing police reform, police organisations, scholars and students alike are faced with the mammoth task of making sense of increasingly complex local, national and transnational policing landscapes. It is precisely this complexity and pace of reform that has shaped the contributions in this collection… one of the key strengths of this edited collection is its ability to explore the complex nature of accountability whilst driving forward a set of collective and shared messages: that the concept of accountability is under theorised by both academics and practitioners; that concerns over accountability are often not new; that there are significant challenges ahead in terms of state systems for regulation – particularly so in a period in which policing has become pluralised and privatised and transnational in orientation; and lastly, that the ongoing need for greater police accountability is best conceived of as a positive mechanism within which those engaged in policing can reflect upon their practice to bring about meaningful change as well as an opportunity to document evidence of good practice…. Above all else, this book stands as a testament to the need for rigorous academic debate on the issue of accountability." - Marisa Silvestri, Associate Professor in Criminology, Kingston University, UK, Policing and Society

Stuart Lister is Senior Lecturer in Criminal Justice at the University of Leeds. His research interests focus on exploring the changes and continuities in the arrangement, provision, accountability and effectiveness of contemporary policing and security endeavours. He has worked previously at the Universities of Durham and Keele.

Michael Rowe is Professor of Criminology at Northumbria University. His research interests focus on the ethics and governance of policing, diversity in criminal justice, and offender desistance. He has taught at Victoria University, Wellington and at the University of Leicester.