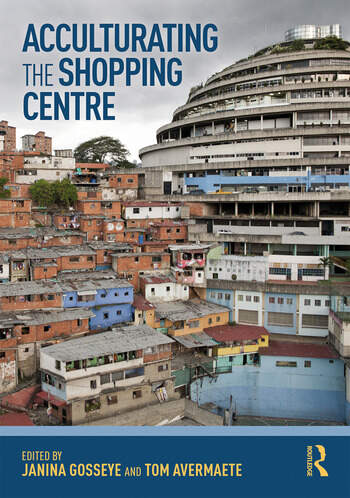 Acculturating the Shopping Centre examines whether the shopping centre should be qualified as a global architectural type that effortlessly moves across national and cultural borders in the slipstream of neo-liberal globalization, or should instead be understood as a geographically and temporally bound expression of negotiations between mall developers (representatives of a global logic of capitalist accumulation) on the one hand, and local actors (architects/governments/citizens) on the other. It explores how the shopping centre adapts to new cultural contexts, and questions whether this commercial type has the capacity to disrupt or even amend the conditions that it encounters.

Including more than 50 illustrations, this book considers the evolving architecture of shopping centres. It would be beneficial to academics and students across a number of areas such as architecture, urban design, cultural geography and sociology.

Janina Gosseye is Senior Research Associate at ETH Zürich, Switzerland. Her research is situated at the nexus of architectural theory, urban planning and social and political history. Gosseye has edited and authored several books, including Shopping Towns Europe 1945–75: Commercial Collectivity and the Architecture of the Shopping Centre (2017, with Tom Avermaete). Her research has also been published in several leading journals, including the Journal of Architecture and the Journal of Urban History. In 2018, Gosseye was awarded a Graham Foundation Grant for her forthcoming book Speaking of Buildings (2019, with Naomi Stead and Deborah van der Plaat).

is Professor at ETH Zürich, Switzerland, where he is Chair for the History and Theory of Urban Design. Avermaete has a special research interest in the post-war public realm and the architecture of the city in Western and non-Western contexts. He is the author of Another Modern: The Post-War Architecture and Urbanism of Candilis-Josic-Woods (2005) and Casablanca, Chandigarh: A Report on Modernization (2014, with Maristella Casciato). Avermaete has also edited numerous books, including Shopping Towns Europe 1945–75: Commercial Collectivity and the Architecture of the Shopping Centre (2017, with Janina Gosseye), and is a member of the editorial team of OASE Architectural Journal and the advisory board of the Architectural Theory Review, among others.

"Global historiography at its best! With case studies from diverse sites such as Venenuela, Iran, Indonesia and the UK, this collection of essays by an international cast of scholars offers a long needed discussion of the complex global forms and affects of the much maligned (sub)urban shopping mall."

"This collection of brilliant scholarly essays sheds light on what is arguably the only building type whose signature has transformed the urban and sociological landscapes of contemporary megalopolises the world over. The metamorphosis of the functional and geometrical principles characterizing the city core has been accelerated by the transformation of main streets into shopping centre, while central, pedestrian street-like spaces have mutated in scale into the creation of urban mall. Janina Gosseye and Tom Avermaete have edited a book that demonstrates that this ‘(mall)eable’ modernist type is far from being a ‘non-lieu’ -- rather, it is the ritual space of a new citizenship." Maristella Casciato, Senior Curator Architecture, Getty Research Institute, Los Angeles, USA

"Acculturating the Shopping Centre shows how these often-stereotyped places, built across the global south since the 1950s, were dynamic hybrids, variously shaped by shoppers, politicians, developers, builders and citizens. The authors reach beyond the zero sum critiques of consumption to show the diversity of shopping centres – as physical sites and as cultural situations. The essays also consider how, under the guise of shopping, the socio-historical concept of "the urban" transforms, re-making cultural norms, creating new sites of communal experience, and requiring new forms of global inquiry. The mall is dead, long live the mall!"