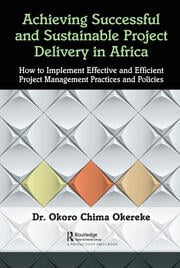 Achieving Successful and Sustainable Project Delivery in Africa: How to Implement Effective and Efficient Project Management Practices and Policies

African nations have an underdeveloped industrial and economic base such as their water supply, electrical systems, roads, railways, etc. Massive funding is required to build each of these basic services to the levels of developed nations – funding they don’t have. Many African countries rely on assistance from the government and global companies looking to invest or facilitate projects in the region. And for a variety of reasons, many of these projects fail or are inadequate to fulfil the needs of the nation. In order to facilitate their own economic development, African nations need to cultivate efficient project management practices and policies that will help them achieve their goal of sustainability.

This book by a multidisciplinary project management consultant, contributes to the body of knowledge that each African country can attain and sustain economic development by suggesting how to eliminate and correct most causes of failures of projects in construction, water treatment, electricity and renewable energy. It suggests that they should also be able to obtain the sustainable harvesting of the benefits of project deliverables which have been planned for in order to implement the various aspects of their economic development.

The suggestions in this book will make a difference in project delivery and are comprehensive enough to create a root-and-branch change which will affect the people involved in making decision on projects and their delivery. Thus, project management teams and their managers, organization decision makers, companies looking to invest in the region, and politicians who plan the economy have to understand the causes of unhelpful practices and what needs to be done in order to produce productive and effective delivery of long-term sustainable project.

The principal goal of this book is to advise public and private companies, and international organizations conducting projects in Africa on how to prepare themselves, their businesses and enterprises to solve the problems that cause failure of projects and abandonment of project deliverables. The book also recommends the necessity for a commercial enterprise or government entity to prepare and develop its vision, mission, and strategic objects to constitute the basis of a business plan which should be implemented for successful operations. After first identifying various failed and abandoned projects in Nigeria, Ghana and South Africa, the author provides an analysis of why these projects failed or were abandoned. By using methodologies of Organizational Project Management (OPM), Project Portfolio Management (PPM) and project management techniques, he suggests a framework for project delivery which could be used as a foundational structure and platform that will address the problem and provide solutions for the achievement of successful and sustainable project delivery in Africa.

Chima is the Managing Director of Total Technology Consultants, Ltd., a project and business management consulting company practising in Africa and the UK.

He started his career as a young electrical engineer in 1976 in Nigeria in the then National Electric Power Authority (NEPA) after completing his National Youth Corps Service (NYSC) and graduating from the University of Lagos, Nigeria. He had his initial hands-on training as a pupil engineer with technical assistants from Canadian Ontario Hydro in a number of electrical substations and electricity generating power stations comprising gas-fired power plants, steam thermal plants, and coal-fired power plant, in Nigeria. He then had an in-depth hands-on overseas training with Electricity Supply Board of Ireland in Dublin and some other cities in Ireland for 13 months.

In 1977, he returned to do further training with technical assistants from the then UK Central Electricity Generation Board (CEGB) and also participated in the installation, commissioning and operations of a 6 x 120 MW steam thermal power station at the NEPA Power Station, Ogorode, Sapele, Nigeria. He left NEPA as a Principal Engineer and Section Head for Instrumentation & Control. He worked briefly in Shell Petroleum Development Company in Warri as a technical trainer, a project engineer, and writer in the Scallop Training Project between 1979 and 1982. In June 1982, he joined the Delta Steel Company Limited, Ovwian Aladja as a Deputy Manager. In 1984, he became a chief engineer and head of Instrumentation and Computing Systems.

He has been a COREN registered engineer and a corporate member of the Nigerian Society of Engineers since 1983 and 1982 respectively. He left the steel company for graduate studies in the UK in September 1988.

Graduate studies in the UK

At the University of Bradford, West Yorkshire, England, he passed the taught part of the MBA degree in 1989. He obtained his Ph.D. degree following research in robotics in 1994, and his Master’s in Business Administration (MBA) degree following the successful completion of his dissertation in 1995.

Having established his company in the UK in 1995, he worked both in the UK and overseas. He also established a company in 2002 in Nigeria and worked as a Primavera Authorised Representative serving, local, national and multinational companies. Between 2004 and 2008, on his initiative and working with the endorsement of  Port Harcourt Chamber of Commerce, Industry, Mines and Agriculture (PHCCIMA), produced the first world class Yellow Pages and Business Directory for the Rivers State of Nigeria. It is instructive that after this trail-blazing publication, other entrepreneurs went on to produce their own versions of the Yellow Pages

In June 2009, he took the PMI PMP certification examination and passed at the first attempt. Between 2002 and end of 2018, his company trained over 600 project management professionals on enterprise project management courses in Nigeria and Gabon. His company was the first and only Primavera Authorised Representatives (PAR) in West Africa from 2003 to 2009. By 2019, it was a Gold-level member of Oracle Partner Network, and also a partner of Microsoft, IBM and SAP.

Chima is a visiting professor, an industrial educator, a multidisciplinary project management professional and specialist in industrial automation, with over 25 years’ experience in oil and gas, steel and power generation industries. He is an international editorial advisor for the PM World Journal and PM World Library having written over thirty published papers for the journal. He lives and works from his office in the UK and could be contacted at [email protected], or [email protected]