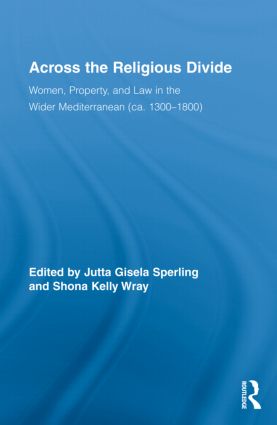 Across the Religious Divide

Examining women's property rights in different societies across the entire medieval and early modern Mediterranean, this volume introduces a unique comparative perspective to the complexities of gender relations in Muslim, Jewish, and Christian communities. Through individual case studies based on urban and rural, elite and non-elite, religious and secular communities, Across the Religious Divide presents the only nuanced history of the region that incorporates peripheral areas such as Portugal, the Aegean Islands, Dalmatia, and Albania into the central narrative.

By bridging the present-day notional and cultural divide between Muslim and Judeo-Christian worlds with geographical and thematic coherence, this collection of essays by top international scholars focuses on women in courts of law and sources such as notarial records, testaments, legal commentaries, and administrative records to offer the most advanced research and illuminate real connections across boundaries of gender, religion, and culture.

Jutta Sperling, Hampshire College. Her main publications include Convents and the Body Politic in Late Renaissance Venice 1550-1650 (1999) as well as articles on the abolition of clandestine marriages at the Council of Trent and on Portuguese women's property rights. Her current research interests focus on iconographies of lactation in Renaissance and Baroque art.

Shona Kelly Wray, University of Missouri-Kansas City. Her research incorporates various aspects of the social history of fourteenth-century Bologna. She has published articles on women, family, and inheritance, notarial culture, the social experience of the Black Death, and peace and dispute settlements. Her first book, Communities and Crisis: Bologna during the Black Death, was published in 2009.

Routledge Research in Gender and History