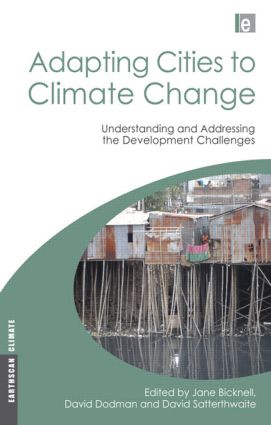 This volume brings together, for the first time, a wide-ranging and detailed body of information identifying and assessing risk, vulnerability and adaptation to climate change in urban centres in low- and middle-income countries. Framed by an overview of the main possibilities and constraints for adaptation, the contributors examine the implications of climate change for cities in Africa, Asia and Latin America, and propose innovative agendas for adaptation. The book should be of interest to policy makers, practitioners and academics who face the challenge of addressing climate change vulnerability and adaptation in urban centres throughout the global South. Published with E&U and International Institute for Environment and Development

"With every new assessment of climate change being more alarming and urgent than the last, this is an incredibly timely book. It looks at what cities can do both to be part of the solution as well as being a practical guide for city governments on how to protect their populations from increasingly violent weather."— Ken Livingstone, Mayor of London (2000-2008)

"This is a strategic contribution to the fight for environmental sustainability. A very diverse set of authors and cases illuminates the many ways in which the global climate challenge becomes concrete and urgent in cities."— Saskia Sassen, Columbia University, and author of Territory, Authority, Rights

"It won't be long before adapting to climate change dominates the lives of more than half of humankind - in cities the world over. That means quite simply that everything being done today on urban infrastructure, the built environment and social systems, has to be 'future-proofed' in terms of those impacts. Adapting Cities to Climate Change provides inspiring examples of where this is already happening - with resilience 'baked in' as it were - whilst reminding both policy-makers and community activists that they're still way off the pace in terms of the quality of leadership they now need to provide."— Jonathon Porritt, Founder Director, Forum for the Future, chair of the UK Sustainable Development Commission and author of Capitalism as If the World Matters

'The book expresses the global view on climate change in different cities and different countries. It is a collection of articles with case studies. This is an outstanding collection."— Built Environment

"This is a notable book, which should be read by any engineer seeking an accessible literature review on the new environmental challenges facing us all."— Proceedings of the Institution of Civil Engineers

"The book collects a selection of articles, published in Environment and Urbanization between 2007 and 2009, addressing the issue of the adaptation to climate change of cities in middle- and low-income countries. The contributors are scholars in different disciplines and experts working in fields, such as environment, urban planning, social issues and health."— Bruno Zanon, University of Trento