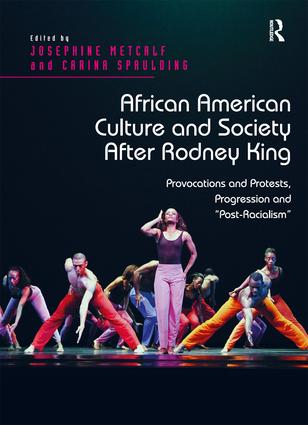 1992 was a pivotal moment in African American history, with the Rodney King riots providing palpable evidence of racialized police brutality, media stereotyping of African Americans, and institutional discrimination. Following the twentieth anniversary of the Los Angeles uprising, this time period allows reflection on the shifting state of race in America, considering these stark realities as well as the election of the country's first black president, a growing African American middle class, and the black authors and artists significantly contributing to America's cultural output. Divided into six sections, (The African American Criminal in Culture and Media; Slave Voices and Bodies in Poetry and Plays; Representing African American Gender and Sexuality in Pop-Culture and Society; Black Cultural Production in Music and Dance; Obama and the Politics of Race; and Ongoing Realities and the Meaning of 'Blackness') this book is an engaging collection of chapters, varied in critical content and theoretical standpoints, linked by their intellectual stimulation and fascination with African American life, and questioning how and to what extent American culture and society is 'past' race. The chapters are united by an intertwined sense of progression and regression which addresses the diverse dynamics of continuity and change that have defined shifts in the African American experience over the past twenty years.

’There are countless ways of explaining the two decades between the Los Angeles riots of 1992 and the re-election of America’s first black president in 2012. This eclectic collection of essays bravely attempts to make sense of this tumultuous and dynamic period for African American culture. Charting the re-composition of the cultural industries, the ascendant place of broadcast media, and underlying shifts in political economy, these engaging, and often thoughtful, essays bring into focus some of the major trends in African American life at the turn of the twenty-first century.’ Andrew Fearnley, University of Manchester, UK ’This excellent, comprehensive … collection of multidisciplinary essays on contemporary African American culture is diverse and topical. At the cutting-edge of cultural criticism these critics from both sides of the Atlantic bring a vibrancy to debates about race in America that challenge the complacent and limiting transnational neo-liberal consensus.’ Alan Rice, University of Central Lancashire, UK ’Metcalf and Spaulding have pulled together an eclectic, lively, sometimes provocative, but always rewarding collection of essays on the African American experience since 1992. With contributions that take us from the politics of African American music and dance to (mis-)characterizations of black criminality, from Obama's presidency to Beyoncé’s hair, and from Tyler Perry's gender-bending performances - and entrepreneurial success - to the latest articulations of "blackness" in film, television, literature, and the visual arts, the book reminds us of the multiple meanings, the uses and abuses, of race as a category of identity and analysis in modern America. It is a timely and important contribution to contemporary debates about race, rights, and the politics of representation.’ Brian Ward, Northumbria University, UK ’Bringing together work on print and electronic media representation, literature, film, music, dance and telev