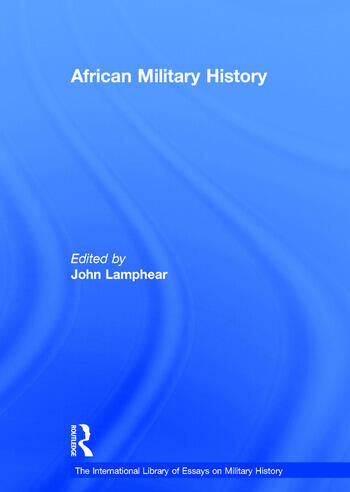 Contents: Series preface; Introduction; The wars of August: diagonal narrative in African history, Robert W. Harms; 'He swalloweth the ground with fierceness and rage': the horse in the Central Sudan, Humphrey J. Fisher; Spears, style and time among Maa-speaking pastoralists, Roy Larick; The view from Awdaghast: war, trade and social change in the Southwest Sahara from the 8th to the 15th century, E. Ann MacDougall; Archers, musketeers and mosquitoes: the Moroccan invasion of the Sudan and the Songhay resistance (1591-1612), Lansiné Kaba; Portuguese musketeers on the Zambezi, Richard Gray; The art of war in Angola, 1575-1680, John K. Thornton; Dahomey and the slave trade: reflections on the historiography of the rise of Dahomey, Robin Law; Horses, firearms, and political power in pre-colonial West Africa, Robin Law; The impact of the Atlantic slave trade on the societies of the Western Sudan, Martin A. Klien; The sacred musket: tactics, technology and power in 18th-century Madagascar, Gerald M. Berg; Sources of conflict in Southern Africa c 1800-30: the 'Mfecane' reconsidered, Elizabeth A. Eldredge; 'The character and objects of Chaka': reconsideration of the making of Shaka as 'Mfecane Motor', Carolyn Anne Hamilton; Firearms in South Central Africa, Anthony Atmore, J.M. Chirenje and S.I. Mudenge; Military organization and the pre-colonial policy of Bemba of Zambia, A.L. Epstein; Professional warriors in 19th-century Yoruba politics, J.F.A. Ajayi; Production and reproduction of warrior states: Segu Bembara and Segu Tukolor, c 1712-1890, Richard L. Roberts; Firearms and princely power in Ethiopia in the 19th century, R.A. Caulk; 'For God, Emperor and Country': the evolution of Ethiopia's 19th-century army, John Dunn; War and militarism in pre-colonial Buganda, Richard Reid; The Wasaki war: an oral narrative of Southwestern Kenya, Michael G. Kenny; War, famine and pestilence in late pre-colonial Tanzania: a case for a heightened mortality, Juhani Koponen; Nam

John Lamphear is Professor in the Department of History, University of Texas-Austin, USA.

'...this is an admirable, sensitively selected edition with a helpful analytical introduction..a reference work which will be used - and footnoted - by many in the years to come...a significant contribution to the historiography of Africa.'- Journal of African History '...all the essays are worthy of study.' International Journal of African Historical Studies '...the choice of topics covered is commendable and they provide excellent starting points for those with more interest in the topics or areas discussed to develop reading lists from. Furthermore, all of the articles included are augmented by Lamphear’s introduction, which provides not only guidance to key further readings, but also an overview of the historiography of each outlined section.' Kronos: Journal of Southern African Histories '..an excellent collection of classic journal articles on aspects of pre-colonial African warfare...a worthy monument.' African Affairs