After Childhood
Re-thinking Environment, Materiality and Media in Children's Lives 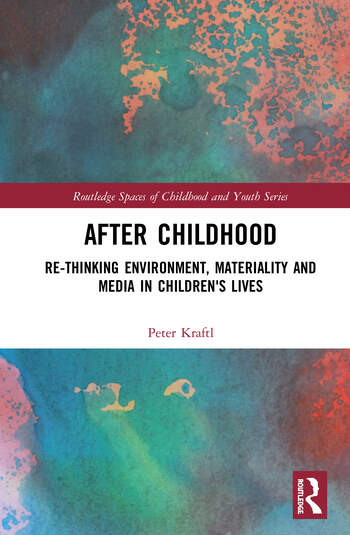 After Childhood: Re-thinking Environment, Materiality and Media in Children's Lives

This book offers a new approach for theorising and undertaking childhood research. It combines insights from childhood and generational studies with object-oriented ontologies, new materialisms, critical race and gender theories to address a range of key, intractable challenges facing children and young people.

Bringing together traditional social-scientific research methods with techniques from digital media studies, archaeology, environmental nanoscience and the visual arts, After Childhood: Re-thinking Environment, Materiality and Media in Children's Lives presents a way of doing childhood research that sees children move in and out of focus. In doing so, children and their experiences are not completely displaced; rather, new perspectives on concerns facing children around the world are unravelled which dominant approaches to childhood studies have not yet fully addressed. The book draws on the author’s detailed case studies from his research in historical and geographical contexts. Examples range from British children’s engagement with plastics, energy and other matter, to the positioning of diverse Brazilian young people in environmental and resource challenges, and from archaeological evidence about childhoods in the USA and Europe to the global circulation of children’s toys through digital media.

The book will appeal to human geographers, sociologists, anthropologists, education studies scholars and others working in the interdisciplinary field of childhood studies, as well as to anyone looking for a range of novel, interdisciplinary frames for thinking about childhood.

Peter Kraftl is Professor of Human Geography at the University of Birmingham, UK. His research focuses on geographies of children and young people, and geographies of education. He has published eight books and over 50 journal articles, including Children Living in Sustainable Built Environments (Routledge, 2017).

"Once or twice in a generation of academics and scholars comes something that brings together a myriad of speculations, holds them in tension, and takes flight in new directions. After Childhood is precisely that thing; it is a game changer – a new play-book – for the field of childhood studies.

Peter Kraftl’s radical interdisciplinary perspective brings together geologies, archaeologies, nano-technologies, historical cuttings, bio-sciences, alien phenomenologies, queer alliances, speculative fabulations and other persuasions not often found in childhood studies to produce a playful, chilling and infinitely practical guide to apprehending the complexities of Anthropocenic childhoods. From the first chapter, which takes pains to explain how the ways ‘after-‘ mediates the limitations of the post-humanities, new materialism, and object-oriented ontologies, through chapters that thoughtfully and humbly delve into and beyond (infra)generations, resource power, energy and plastics (where children come into, and ‘phase’ out of, focus), to the last chapter where he purposefully centers children, Kraftl is careful not to present a de-terittorialization and re-territorialization, or a de-centering and a re-centering. Rather, Kraftl uses what he calls a ‘pull focus’ as an analytic device to turn towards notions of ‘arts of (not) noticing’. With analysis and stories from Birmingham to Brazil, the complexities of issues implicating children (and their human, non-human, more-than-human relations and generations) are elaborated by Kraftl in critical, humbling, perplexing and yet hopeful ways.

will radically alter how we think and do childhood studies."

"After Childhood is a much-needed breath of fresh air into childhood studies, particularly that in the new materialist and posthumanist vein. Working from his frustration with some of current childhood scholarship, Peter Kraftl offers ambitious new openings while remaining humble and aware of the contributions and work done so far in the field.

Kraftl’s book is a gentle, yet passionate and adamant push further for every childhood scholar. The book succeeds in disturbing one’s sense of comfort and accomplishment at the face of increasingly complex environmental and social challenges that cut across and matter to children in sometimes even traumatizing ways. It is clear we need to do more and to think more, and differently. And for this After Childhood provides new terminology, resurrects old approaches and suggests creative couplings.

For one, Kraftl suggests we cannot begin with childhoods or where the child is. Rather we need to first move children as if out of the focus, and only after locate children’s positions within the given situations or phenomena studied. Imperative, to Kraftl, is that this endeavor is a collective one: that childhood scholars join forces with others in and beyond social sciences. The book provides empirical examples of this as Kraftl discusses a range of interdisciplinary collaborations from social media analyses to nanoscientific techniques, all the while asking: "Where, exactly, is the child?"

"The cliché that children are the future has been rebutted in childhood studies, in favour of a focus on children’s lives in the present. Yet this way of thinking increasingly seems untenable in a world characterised by rapid environmental and technological change, in which troubling visions of the future have become impossible to ignore.

In After Childhood, Peter Kraftl tackles head on the difficult task of rethinking childhood in a way fit for such uncertain times. In recognition of the complexity of Anthropocene childhoods, the book draws together a dizzying array of empirical and theoretical material: object orientated ontology, feminist, queer and critical race theory; research data from Brazil and the UK; arts-based methods, digital media analysis, archaeologies of childhood and experiments with biosampling; as well as a welcome engagement with questions of energy, to complement recent new materialist analyses of childhood.

What emerges from this work is a set of speculative but generative new ways of thinking and doing ‘after childhood’. As such, this book will be essential reading for anyone concerned with how childhood relates to the wider forces, materials and temporalities of our planet."

"Childhood studies has been waiting for a book like this. Theoretically sophisticated, empirically rich and lucidly argued, After Childhood makes a critical multidisciplinary intervention that invites us to imagine childhood otherwise.  Through a brilliant process of "decentring and recentring, speeding up and slowing down, scaling up and scaling down," Peter Kraftl reconfigures the counters of childhood and responds to the literature on climate justice. After Childhood comes at a critical turning point when young people demand climate action around the world. It not only shows the role that young people play in climate justice, but it also compels childhood researchers to create a critical-creative theoretical lens in their research. This is a book that all readers in childhood related disciplines must read."

"Over more than a decade the social study of childhood has been one of the fields drawing on and contributing to the turn towards interdisciplinarity, relational materialism and cognate developments. Peter Kraftl has been on the forefront of this movement and in his new book he draws together these threads, exposes some of the problems and issues they raise and points to the new directions that might now be taken. It is a substantial contribution that indicates some new ways of asking questions as well as broadening the field of enquiry in promising and exciting ways. It should be read by university teachers, childhood researchers, postgraduate students and anyone interested in the terms of debate for multi-disciplinary effort across many different fields."