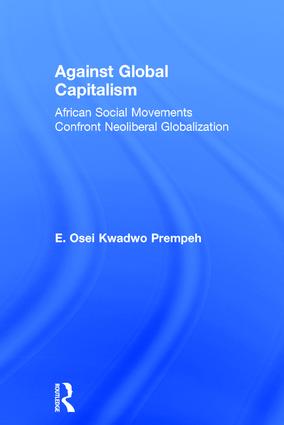 The fundamental challenge of democratizing globalization by opening up spaces for democratic participation beyond the state is addressed in this study. The author captures both the democratic activities and voices of opposition to neoliberal globalization and investigates how this reinvention of democracy through resistance to neoliberal globalization has taken shape in the African context. In doing so, he reasserts the relevance of the de-globalization and anti-capitalism movements. With a careful selection of case studies, this volume is ideal for classroom use and library reference.

'Against Global Capitalism is a welcome addition to the scanty critical literature on Africa's encounter with globalization. This must-read book is original in its focus on how African social movements could be deployed to resist the exploitations wrought by neoliberal globalization across the continent. Going beyond the common push to democratize globalization, Prempeh calls for the use of a new counter-hegemonic discourse to interrogate and subvert globalization itself.' Joseph Mensah, York University, Canada 'This will prove a rewarding read, not just for Africanists, but for anyone interested in globalization and its discontents.' Political Studies Review

Contents: Introduction. Part 1 'Convential Views' and Perspectives on Neoliberal Globalization: The No Alternative Discourse: Understanding globalization; The Third Way: globalization lite or real alternative?. Part 2 Contestation and Resistance to Neoliberal Globalization: Radical Alternative Visions: The deglobalization and anti-capitalism movement and alternative visions to neoliberal globalization; The anti-capitalism movement and African resistance to neoliberal globalization. Part 3 Contemporary Applied Issues and the Reinvention of Democracy Through Mass Mobilization and Resistance: African social movements engagement with the New Partnership for Africa's Development (NEPAD); Articulating resistance to medical apartheid: the Campaign for HIV/AIDS drugs in Africa; Against water privatization: the struggle continues; Social movements and the campaign for debt cancellation: resisting debt domination; Social movements and the new trade regime: an issue of fairness, not charity; Index.

E. Osei Kwadwo Prempeh is Associate Professor in the Department of Political Science, Carleton University, Ottawa, Canada. His primary research and teaching interests include the politics of globalization, global democratization and human rights, indigenous conflict analysis and resolution, and alternative forms of democracy and governance.