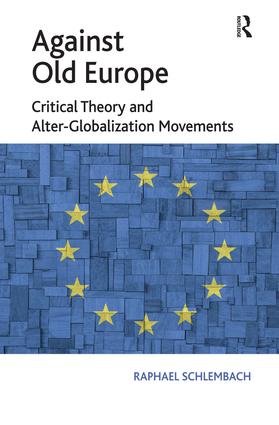 In the wake of the Iraq war, the term Old Europe was appropriated by politicians, civil society and social movement actors alike to rally in defence of supposedly social and civilized values against the perceived predatory forces of American finance. Against Old Europe sheds light on the social movement politics encapsulated in the protest slogan 'Fight Old Europe'. Within what is broadly labelled the global justice movement, it explores a particular, radical perspective that warns against the identification with European values by movements resisting neoliberalism. Exploring the work of key theorists critical of globalization, including Habermas, Negri, Holloway, Postone and de Benoist, the book examines critical theory approaches to alter-globalization, illustrated with concrete examples of movements within contemporary Europe. In so doing, it invites readers to explore the charges of nationalism, anti-Americanism and antisemitism brought against parts of the alter-globalization movement. Providing a new perspective on critiques of globalization, Against Old Europe will appeal to sociologists and social and political theorists studying social movements, anti-globalization activism and European politics and identity.

'… a fascinating, informative and highly original read, taking a unique angle on European identity and resistance, as well as demonstrating a rare willingness to fully engage with right-wing movements and theory so often neglected in social movement theory (such as de Benoist’s).' Antipode 'There is no voice more indispensable than Raphael Schlembach’s in understanding radical struggles over European identity. His analysis of competing visions of Old Europe� - from the radical left and the far right - is a refreshing alternative to competing studies. All too often accounts, especially those seeking to explain support for the radical right, collapse into what Karl Marx would have called parliamentary cretinism�. By contrast, Against Old Europe cuts across theory and practice to offer new insights on alter-globalisation activism today.’ Adam David Morton, University of Sydney, Australia ’Old Europe? New Europe? From Habermas, Holloway, Negri to Postone, Schlembach’s Against Old Europe does not look on the bright side of all things Europe�. He looks straight at it and asks: what is right, what is new and what does it mean to say left�? This is a splendid book. You should read it - without delay.’ Werner Bonefeld, University of York, UK ’Against Old Europe is a fascinating and highly original book which offers a genuinely new perspective upon both alter-globalisation and Europe. Thoughtful and well-written, this book will change the way that you think about the contemporary political conjuncture.’ Nick Crossley, University of Manchester, UK