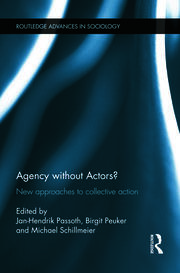 The question of agency is a key issue in social theory and research. The discourse of human agency as an effect of social relations is deeply intertwined with the history of sociological thought. However, in most recent discussions the role of non-humans gains a substantial impact concerning agency. Agency without Actors? New Approaches to Collective Action asks: Are nonhumans active, do they have agency? And if so: how and in which different ways?

By studying the substantial impact of the role of non-humans in connection with human relations, the book aims to advance the discourse on agency and investigates into the different possible modes of human and nonhuman interplay.

Note on Contributors  1. Introduction  Part 1: Events, Suggestions, Accounts  2. Suggestion and Satisfaction: On the Actual Occasion of Agency by Paul Stronge and Mike Michael  3. Science, Cosmopolitics and the Question of Agency: Kant’s Critique and Stengers’ Event by Michael Schillmeier  4. Questioning the Human/Non-Human Distinction by Florence Rudolf  5. Agency and "Worlds" of Accounts: Erasing the Trace or Rephrasing the Action? by Rolland Munro  Part 2: Contribution, Distribution, Failures  6. Distributed Agency and Advanced Technology, Or: How to Analyze Constellations of Collective Inter-Agency by Werner Rammert  7. Distributed Sleeping and Breathing: On the Agency of Means in Medical Work by Cornelius Schubert  8. Agencies’ Democracy: "Contribution" as a Paradigm to (Re)thinking the Common in a World of Conflict by Jacques Roux  9. Reality Failures by John Law  Part 3: Interaction, Partnership, Organization  10. "What’s the Story?" Organizing as a Mode of Existence by Bruno Latour  11. Researching Water Quality with Non-Humans: An ANT Account by Christelle Gramaglia & Delaine Sampaio Da Silva  12. Horses – Significant Others, People’s Companions, and Subtle Actors by Marion Mangelsdorf

Jan-Hendrik Passoth teaches Media Sociology, Science and Technology Studies and Social Theory at Bielefeld University. He is working on problems of social structure and infrastructures, human and non-human agency and discourse and material culture.

Michael Schillmeier teaches Sociology, Science and Technology Studies and Empirical Philosophy at the Department of Sociology at Ludwig-Maximilians University in Germany. He currently holds a Schumpeter Fellowship to research ‘Innovations in Nano-Medicine’.