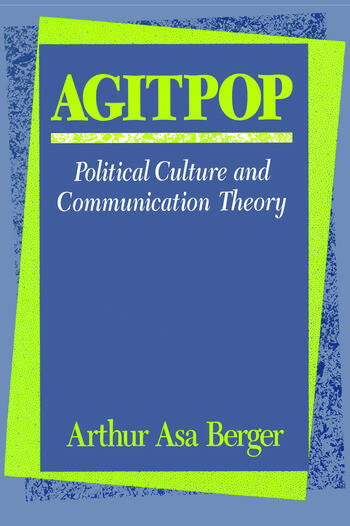 In this entirely sophisticated and scholarly account of political culture, Arthur Asa Berger shows how the variety of cultural preferences creates the foundations of communication theory. Using the work of Aaron Wildavsky, the author shows how individualism, egalitarianism, collectivism, and fatalism form the basis of culture in complex societies. But more importantly, Berger breaks down the mechanical distinction between mass culture and elite culture, showing how they interpenetrate and crossover at the level of competitive and hierarchical frames. Agitpop, now in paperback, suggests that there is an ideological content to our popular culture, even though the creators no less than the consumers of that culture are either unaware or dimly aware that they are creating works with an ideological bent. The work takes up in quick order two examples from different areas of the hierarchical, individualist, egalitarian, and fatalist cultures. From football games to the Iran-Contra Hearings, from MTV to the Human Potential Movement, from Max Headroom to humor on the Jews, and from wrestling to The Terminator, Berger takes up his master themes with a deft touch of his own. Weaving in the work of scholars from Emile Durkheim to Aaron Wildavsky he manages to make each of the chapters very much his own. For those who know the earlier work of this author, the reader will be very much at home; for those new to Berger, the volume will be a joyous revelation. The final three chapters reveal a deeper aspect of Berger's work. His interpretation of the earlier materials in terms of the semiotics of power, of textual analysis, or deconstruction of the media, and finally, an analysis and self-analysis of the larger research agenda of which this work is pivotal, should make this book central to the theoretical construction of popular and political culture. For people working in communications theory, political culture, and the sociology of knowledge, this book is a must; for everyone else, it is a joy.