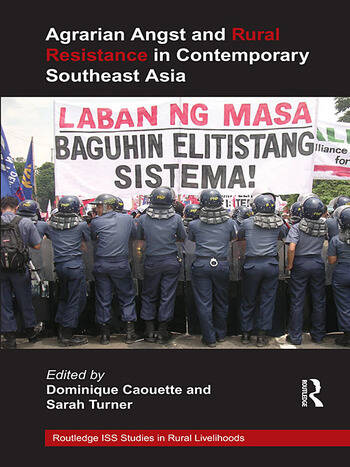 Agrarian transformations, market integration and globalization processes are impacting upon rural Southeast Asia with increasingly complex and diverse consequences. In response, local inhabitants are devising a broad range of resistance measures that they feel will best protect or improve their livelihoods, ensure greater social justice and equity, or allow them to just be left alone. This book develops a multi-scalar approach to examine such resistance occurring in relation to agrarian transformations in the Southeast Asian region.

The contributors take a fresh look at the diversity of sites of struggle and the combinations of resistance measures being utilized in contemporary Southeast Asia. They reveal that open public conflicts and debates are taking place between dominators and the oppressed, at the same time as covert critiques of power and everyday forms of resistance. The book shows how resistance measures are context contingent, shaped by different world views, and shift according to local circumstances, the opening and closing of political opportunity structures, and the historical peculiarities of resistance dynamics.

By providing new conceptual approaches and illustrative case studies that cut across scales and forms, this book will be of interest to academics and students in comparative politics, sociology, human geography, environmental studies, cultural anthropology and Southeast Asian studies. It will also help to further debate and action among academics, activists and policymakers.

'Unlike many edited collections, this book forms a well-integrated, coherent whole that can be read fruitfully from cover to cover.' - Rob Cramb, University of Queensland, USA

'Dominique Caouette and Sarah Turner have an ambitious agenda in this rich and insightful volume. [...] The chapters are well-edited and pithy, allowing inclusion of a solid range of cases and perspectives. The inclusion of images and maps adds to the sense of grounded context.' - Meredith L. Weiss, State University of New York, USA

'This edited collection has been thoughtfully compiled and is an absorbing read for anyone who has spent time in rural Southeast Asia. [...] Agrarian Angst and Rural Resistance in Contemporary Southeast Asia should become a valuable resource not only for scholars of Southeast Asia but also for those with more general interests in understanding rural resistance in other regions of the Global South.' - Adam Lukasiewicz, York University, Canada

'Highly informative and relevant in a time of major changes in the Southeast Asian landscape. Policymakers and academics trying to understand the intricate balance between economic growth and agragarian resistance should read this book.' - Roland Cheo, National University of Singapore

'The work of anthropologists, geographers, media analysts, political scientists, and sociologists who weave together both their engagement with social science debates and their deep knowledge of countries in Southeast Asia, this book enhances our knowledge, understanding, and appreciation of resistance not only in that region but among subordinate people around the globe.' - Ben Kerkvliet, Australian National University

'Judging by the impressive quality of the essays assembled here, the study of agrarian resistance in Southeast Asia is in very good hands indeed. Thirty years of technical, political, demographic, and social change have been fully and coherently theorized in this new assessment. It's gratifying to see earlier work (including one's own!) superceded in such style.' - James C. Scott, Yale University, USA