The sixth edition of a bestseller, Air Quality provides students with a comprehensive overview of air quality, the science that continues to provide a better understanding of atmospheric chemistry and its effects on public health and the environment, and the regulatory and technological management practices employed in achieving air quality goals. Maintaining the practical approach that has made previous editions popular, the chapters have been reorganized, new material has been added, less relevant material has been deleted, and new images have been added, particularly those from Earth satellites.

New in the Sixth Edition

This new edition elucidates the challenges we face in our efforts to protect and enhance the quality of the nation’s air. It also highlights the growing global awareness of air quality issues, climate change, and public health concerns in the developing world. The breadth of coverage, review questions at the end of each chapter, extensive glossary, and list of readings place the tools for understanding into your students’ hands.

10. Control of Emissions from Stationary Sources

Wayne T. Davis is the Emeritus Chancellor and Emeritus Dean of the Tickle College of Engineering at University of Tennessee Knoxville (UTK) and retired in 2019. He served as the Associate Dean for research and technology in the college from 2003 to 2008. He is also an Emeritus Professor of civil and environmental engineering. He earned an AB in physics at Pfeiffer University (1969), an MS in physics at Clemson (1971), and an MS in environmental engineering and a PhD in civil engineering at UTK (1973 and 1975, respectively). He has conducted research and teaching in the area of air quality management and pollution control for more than 45 years at UTK, and is the author, coauthor, or editor of numerous research publications, including the Air Pollution Control Engineering Manual (published by John Wiley Publishers) and the graduate textbook Air Pollution: Its Origin and Control (published by Elsevier). He has been involved in numerous projects funded by the US EPA, DOE, ORNL, NSF, DOT, and various state agencies and industrial companies, particularly as related to the monitoring and control of sulfur dioxide, ozone/precursors, and particulate matter. Dr. Davis is a recipient of the Lyman Ripperton Outstanding Professor Award presented by the International Air and Waste Management Association (AWMA), where he is a fellow member; he also received a Lifetime Achievement Award from the Institute of Professional and Environmental Practice (Pittsburgh, Pennsylvania) in 2007. He is also a Board Certified Environmental Engineering Member (BCEEM) of the American Academy of Environmental Engineers and Scientists. Dr. Davis served as chair of the Knox County (Tennessee) Air Pollution Control Board for more than 22 years and served on the State of Tennessee’s Air Pollution Control Board for nine years.

is the Tickle Professor in the Department of Civil and Environmental Engineering at the University of Tennessee Knoxville (UTK). He was a scientific applications analyst and software engineer at Lockheed Martin/EPA before he moved to UTK in 2000. He earned a BS in environmental engineering at National Cheng Kung University (1986), an MS in environmental engineering and water resources at UCLA (1994), and a PhD in civil engineering at North Carolina State University (2000). The focus of his research includes air benefit and attainment assessment, emission estimations, climate change impacts on air quality, energy infrastructure and human health, ozone and particulate matter modeling, and international air quality modeling assessment. Additional focus is to utilize artificial intelligence (AI) and data mining techniques on climate change, human health, and mapping global total atmospheric deposition. He has taught courses in the area of air quality management, climate change, and pollution control at UTK, and is the author of numerous research publications and serves as a journal co-editor for the Atmospheric Chemistry and Physics, a journal editor for the Aerosol and Air Quality Research, and served as a journal associate editor for the Journal of the Air & Waste Management Association. He has published more than 150 referred journal articles. One of his publications on air quality has been recognized by Elsevier as one of the most cited articles in Atmospheric Environment from 2007 to 2012. He has been a principal investigator and coinvestigator for numerous projects funded by the CDC, DHS, DOE, US DOT, LLNL, NASA, NOAA, NSF, ORNL, US EPA, USDA, various state agencies, and industrial companies. He is a recipient of the Lyman Ripperton Outstanding Professor Award presented by the International Air and Waste Management Association (AWMA). He has received numerous research awards from the Chancellor, College of Engineering, and his department at UTK and ORNL. He is also a Board Certified Environmental Engineering Member (BCEEM) of the American Academy of Environmental Engineers and Scientists. He is vice chair of the WMO’s MMF-GTAD Initiative Steering Committee. He is actively involved in the UN ECE Task Force Hemispheric Transport of Air Pollution, Model Intercomparison Study in Asia, and is a member of the Arctic Council’s Arctic Monitoring and Assessment Programme (AMAP) Short-Lived Climate Forcers (SLCF) Expert Group. He also serves on the Knox County (Tennessee) Air Pollution Control Board and the State of Tennessee Air Pollution Control Board.

was a professor of natural resources and environmental management at Ball State University, Muncie, IN, USA, and a certified industrial hygienist. He received his PhD at Penn State University, State College, PA, USA, in 1969. He was the author or coauthor of Air Quality, 1st–4th eds. (2003), Indoor Environmental Quality (2000), Sick Buildings: Definition and Diagnosis (1995), and Indoor Air Pollution Control (1989). His academic and research focus was hazardous materials/environments health and safety issues. As an industrial hygienist, his primary concern was to protect workers who must respond to a variety of hazardous materials issues.

Professor Godish died on June 20, 2009, at the age of 67, prior to initiation of preparation for the fifth and later editions of Air Quality.

This is an excellent book, covering a broad range of air pollution topics, and providing in-depth, state-of-the-art, information in a simple, interesting, and logical manner. The book could be of great interest to both the classroom teaching to under/post graduate students as well as young researchers who are trying to find their feet in the area of air pollution and its control.

Multiple issues of public concern, such as the effects of pollution on various matters: air quality, health, public welfare, ozone depletion, and climate change, are examined in detail. The new edition has updated the most recent scientific findings of several pollution issues. It is an excellent book for students who will pursue careers in environmental science. It can be offered as the core textbook for both lecture and online classes.

Previous editions of "Air Quality" have sat comfortably on shelves globally for decades. These dog-eared tomes have fostered sound principles in generations of Environmental Scientists. This 6th edition, much improved, and more versatile for my classes, honors this legacy. As in previous iterations, the language is simple but precise; scientific terms are explained in a holistic sense. For the beginner, this book is pioneering instruction; for the veteran practitioner, it is an old friend in new clothing. If you are considering investing your time in this book, don’t hesitate – it is indeed a trustworthy companion. 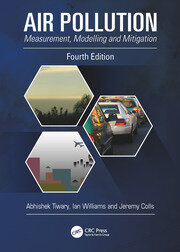 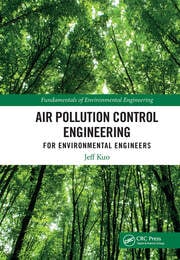 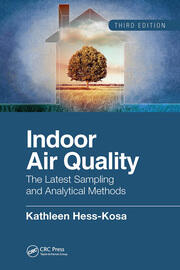