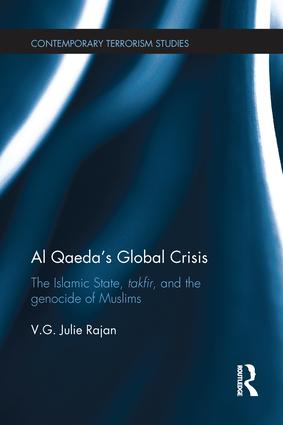 The Islamic State, Takfir and the Genocide of Muslims, 1st Edition

This book focuses on the crises facing Al Qaeda and how the mass killing of Muslims is challenging its credibility as a leader among Islamist jihadist organizations.

The book argues that these crises are directly related to Al Qaeda’s affiliation with the extreme violence employed against Muslims in Iraq, Syria, Afghanistan and Pakistan in the decade since 9/11. Al Qaeda’s public and private responses to this violence differ greatly. While in public Al Qaeda has justified those attacks declaring that, for the establishment of a state of ‘true believers’, they are a necessary evil, in private Al Qaeda has been advising its local affiliates to refrain from killing Muslims. To better understand the crises facing Al Qaeda, the book explores the development of Central Al Qaeda’s complex relationship with radical (mis)appropriations and manifestations of takfir, which allows one Muslim to declare another an unbeliever, and its unique relationship with each of its affiliates in Iraq, Syria, Afghanistan and Pakistan. The author then goes on to consider how the prominence of takfir is contributing to the deteriorating security in those countries and how this is affecting Al Qaeda’s credibility as an Islamist terror organization. The book concludes by considering the long-term viability of Al Qaeda and how its demise could allow the rise of the even more radical, violent Islamic State and the implications this has for the future security of the Middle East, North Africa and Central/South Asia.

This book will be of much interest to students of political violence and terrorism, Islamism, global security and IR.

'In every generation, the terrorists become more violent. Julie Rajan's Al Qaeda's Global Crisis is the first book on the third generation of the contemporary wave of terrorism. Defying Al Qaeda, the rise of the Islamic State is analysed by Rajan's outstanding account of the ideological and operational dimensions of the current and emerging global threat. This masterful study should be read by all those concerned with international security.' -- Rohan Gunaratna, Nanyang Technological University, Singapore

'Julie Rajan details how the genocide of Muslims has been the main cause of instability in Pakistan, Afghanistan, Iraq, and Syria and the key driver of civil wars in the region. The killing of Muslim civilians by AQ backed takfiris has been ignored by other analysts who have almost exclusively focused on violence directed against the West. This timely and fascinating book charts the rise of the Islamic State, demonstrating the generational effects as well as well as how the Islamic State is posing an increasing challenge to the larger al Qaeda network. A must-read for anyone interested in the spread of radical Islamism, why rape is used a strategy of war, and better understand how Iraq became such a disaster.' -- Mia Bloom, University of Massachusetts, Lowell, USA

‘The practice of takfir - declaring other Muslims as infidels - is a central fault line in the global jihadi movement. Yet, the topic is often overlooked in existing literature on al-Qaida. Rajan’s book provides a comprehensive overview of how the killing of Muslims at the hands of al-Qaida's regional affiliates since 2001 has undermined the network's long-term sustainability. The book is essential reading for anyone who seeks to understand the rise and fall of al-Qaida and likeminded movements.’ -- Anne Stenersen, Norwegian Defence Research Establishment, Norway

'Rajan (women's and gender studies, Rutgers Univ.,) takes on the formidable task of explaining how the Islamic concept of takfir is relevant to ongoing conflicts throughout the Muslim world especially in Afghanistan, Pakistan, Iraq, and Syria. … The book is well researched, drawing on primary material and academic and other sources, and it provides solid background for the aforementioned conflicts'

Introduction: Global Crises: Insecurity, Terrorism and Human Rights 1. Islamism, Al Qaeda, and Takfir 2. Iraq, 2003 — : The Shia Resurgence, Zarqawi’s Legacy, and the Islamic State 3. Syria, 2011— : Convoluted Loyalties, a Chaotic Insurgency, and the Revival of the Caliphate 4. Afghanistan 2001—: Centuries of Imperialism, the Rise of the Mujahidin, and the Taliban 5. Pakistan, 2004—: Blasphemy, Tribalism, and a State of Insecurity 6. Al Qaeda’s Global Crisis: Defending Takfir, Losing Relevance, and theRise of the Islamic State

V.G. Julie Rajan is Assistant Professor in the Department of Women's and Gender Studies at Rutgers University, USA. She is the author of Women Suicide Bombers: Narratives of Violence (Routledge 2011).