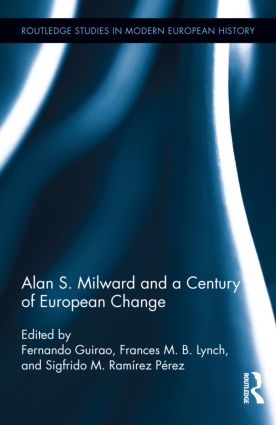 Alan S. Milward and a Century of European Change

The main purpose of the book is to introduce the work of Alan S. Milward and to acknowledge the full magnitude of his scientific contribution to contemporary British and European history. The book is a collection of essays which provide a better understanding of Alan Milward’s extensive intellectual work for future scholars and facilitate the knowledge and transmission of his published work to present and future generations of students, scholars in the various disciplines concerned, and the general public. The series of original contributions which this book contains are related to or reflect critically upon Milward’s own contributions to the fields of political, diplomatic, and socio-economic history, political science, economics, international relations, and European Studies in general. This book honors Alan Milward through a better understanding of his many pioneering contributions in the fields of contemporary European history in general, and the history of European integration in particular. Although the volume does not aim to be a substitute for Milward’s work itself, it illuminates and assesses his creative process along fifty years of continued and intense work, as well as the impact of his main work, and the continuing relevance of his main theses today.

"The book is both thought-provoking and original… [It] is a fitting tribute to its subject and it is to be hoped that it will be widely used by scholars of contemporary European history." - Mark Gilbert, European History Quarterly 43(I)

“Beyond the fascinating scope and breadth of his work, which compares so favourably with the narrow specialization of many younger »integration historians«, Alan S. Milward and his works…constitute an intriguing starting point for any future study of this research field, its contestation and its evolution over time.” - Wolfram Kaiser, Historisk Tidsskrift

"This impressive volume is the outcome of a long effort by the editors to gather a collection of essays able to provide a better understanding of Alan Milward’s work. For both those who had met him and those who had not, this book is a very useful and comprehensive resource. I am certain that anyone, after reading this book, will not only have gained a better understanding of Milward’s writing, but will also come back to his or her own work with new insights, new questions and new ideas." -Emmanuel Mourlon-Droul, University of Glasgow, UK

"Any scholar who has ever uttered the words ‘Europe’ and ‘political economy’ in the same sentence will be hard pressed not to find plenty of interesting material within this volume. It is large and as varied as any festschrift, but given the range of Milward’s interests, that is inevitable, and indeed desirable.This volume…serves as a fitting tribute to Alan Milward, and is warmly recommended for anyone concerned with the development of Europe in the twentieth century." -Mats Ingulstad, Norwegian University of Science and Technology, Norway

Fernando Guirao is Jean Monnet Professor of History at Pompeu Fabra University (Barcelona), member of the Editorial Board of the Journal of European Integration History and of the European Union Liaison Committee of Historians, and author of Spain and the Reconstruction of Western Europe, 1945-57. Challenge and Response (1998).

Frances M.B. Lynch is a Reader in French Studies at the University of Westminster. She is author of Alan S. Milward et al The Frontier of National Sovereignty. History and Theory, 1945-1992 (London, Routledge, 1993) and France and the International Economy From Vichy to the Treaty of Rome (London, Routledge, 1997).

Sigfrido M. Ramírez Pérez is FECYT Researcher at the Institute of Economic History, Università Bocconi Milan, Scientific fellow at the Center for European Contemporary History at the Catholic University Louvain (UCL), and secretary of the GERPISA international network, Ecole Normale Supérieure de Cachan (ENS-Cachan). He is finishing the monograph "Multinational Corporations and the State in the History of European Integration: The Automobile Industry from Fascism to the Treaty of Rome (1939-1958)".