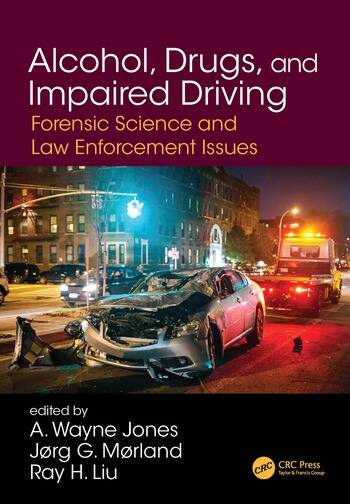 Alcohol, Drugs, and Impaired Driving addresses many theoretical and practical issues related to the role played by alcohol and other psychoactive drugs on driving performance, road-traffic safety, and public health. Several key forensic issues are involved in the enforcement of laws regulating driving under the influence of alcohol and/or other drugs, including analytical toxicology, pharmacology of drug action, as well as the relationships between dose taken, concentration levels in the body, and impairment of performance and behavior. Our knowledge of drunken driving is much more comprehensive than drugged driving, so a large part of this book is devoted to alcohol impairment, as well as impairment caused by use of drugs other than alcohol.

For convenience, the book is divided into four main sections. The first section gives some historical background about measuring alcohol in blood and breath as evidence for the prosecution of traffic offenders. The important role of the Breathalyzer instrument in traffic-law enforcement, especially in Australia, Canada, and the USA is presented along with a biographical sketch of its inventor (Professor Robert F. Borkenstein of Indiana University) with focus on the man, his work and his impact. The second section discusses several issues related to forensic blood and breath-alcohol alcohol analysis as evidence for prosecution of traffic offenders. This includes how the results should be interpreted in relation to impairment and an evaluation of common defense challenges. Because most countries have adopted concentration per se laws, the main thrust of the prosecution case is the suspect’s measured blood- or breath-alcohol concentration. This legal framework necessitates that the analytical methods used are "fit for purpose" and are subjected to rigorous quality assurance procedures. The third section gives a broad overview of the current state of knowledge about driving under the influence of non-alcohol drugs in various countries. This includes adoption of zero-tolerance laws, concentration per se statutes, and clinical evidence of driver impairment based on field sobriety tests and drug recognition expert evidence. The fourth section deals with epidemiology, enforcement, and countermeasures aimed at reducing the threat of drunken and drugged driving.

All articles have appeared previously in the international journal Forensic Science Review, but all are completely updated with current data, references, and the latest research on developments since the articles were published. This book contains a convenient collection of the best articles covering recommendations for blood and breath testing methods, public policy relating to such methods, and forensic and legal implications of the enforcement of measures to counter driving under the influence.

HISTORY OF DRIVING UNDER THE INFLUENCE

1. Driving Under the Influence of Psychoactive Substances — A Historical Review

Other Historical Events of Interest

2. Professor Robert F. Borkenstein — An Appreciation of His Life and Work

3. Epidemiology of Alcohol-Related Accidents and the Grand Rapids Study

4. The Analysis of Ethanol in Blood and Breath for Legal purposes — A Historical Review

5. Use of Punishable Limits of Blood- and Breath-Alcohol Concentration in Traffic-Law Enforcement — Some Advantages and Limitations

8. Pharmacokinetics of Ethanol — A Primer for Forensic Practitioners

9. Biomarkers for the Identification of Alcohol Use/Misuse

USE OF Non-Alcohol Drugs AND IMPAIRED DRIVING

10. Driving Under the Influence of Non-Alcohol Drugs — Review of Earlier Studies

11. Driving Under the Influence of Non-Alcohol Drugs — Experimental Studies

12. Driving Under the Influence of Non-Alcohol Drugs — Epidemiological Studies

13. International Trends in Alcohol and Drug Use Among Motor Vehicle Drivers

15. Methodologies for Establishing the Relationship Between Alcohol/Drug Use and Driving Impairment — Differences Between Epidemiological, Experimental, and Real-Case Studies

Dr. AW Jones was born in Wales, UK, but has lived and worked in Sweden for over 40 years. He recently retired from his appointment as senior scientist at Sweden's National Laboratory of Forensic Medicine, Division of Forensic Genetics and Forensic Toxicology (Linköping, Sweden). Dr. Jones currently serves as a guest Professor in Forensic Toxicology at the Department of Clinical Pharmacology, University of Linköping, Sweden.

Dr. Jones received his first degree (BSc honors class II division I) in chemistry in 1969 and followed this with a PhD degree in 1974, both were awarded by the University of Wales (Cardiff, UK). His PhD thesis was entitled "Equilibrium partition studies of alcohol in biological fluids" and dealt with analytical and physiological aspects of blood and breath-alcohol testing for clinical and forensic purposes. Since 1973 Dr. Jones has been active in research on the pharmacology and toxicology of ethanol as well as many other drugs of abuse. He is particularly interested in methods for quantitative analysis in biological specimens, the disposition and fate of drugs in the body, and their detrimental effects on performance and behavior. In 1993 Dr. Jones was awarded a senior doctorate degree (DSc) by the University of Wales for his published work entitled "Methods of Analysis, Distribution and Metabolism in the Body and Biological Effects of Alcohol and Narcotics".

Dr. Jones serves or has served on the editorial boards for ten international journals devoted to biomedical alcohol research, breath-analysis, forensic science, analytical toxicology, and legal medicine. Furthermore, he functions as ad hoc peer reviewer for papers submitted for publication to 60 other international journals. Dr Jones is author or coauthor of about 430 scientific articles, reviews, and book chapters, most of which are published in peer-reviewed journals. His work is not only well cited in scientific journal articles, but also in court cases concerned with driving under the influence of alcohol and/or other drugs.

Throughout his professional career, Dr. Mørland has served as professor of pharmacology at the University of Oslo and the University of Tromsø (Tromsø, Norway), director of the former Norwegian National Institute of Forensic Toxicology, and was director of the Division of Forensic Medicine and Drug Abuse Research of the Norwegian Institute of Public Health (Oslo, Norway) until 2012.

Dr. Mørland is a medical specialist in clinical pharmacology. His main research field is biomedical effects of alcohol and drugs of abuse, their metabolism and metabolic effects. He has been the principal supervisor for approximately 30 PhD students, as well as being the scientific project manager for several projects supported by the Research Council of Norway.

Dr. Mørland has published more than 400 articles in peer-reviewed journals on pharmacology, toxicology, forensic medicine, neuroscience, alcoholism, epidemiology, drug analysis, and road-traffic safety. He has also written more than 8,000 expert-witness statements for the police and courts in Norway, and has appeared hundreds of times as an expert witness in courts at all levels in Norway as well as in some Swedish courts.

Dr. Mørland was the recipient of a Widmark Award from the International Council on Alcohol, Drugs and Traffic Safety (ICADTS) in 2004.

took a degree in law form the police academy (now Central Police University) in Taipei, Taiwan before coming to Indiana University (Bloomington, IN) to study forensic science under the guidance of Professor Robert F. Borkenstein with internship training in Dr. Doug Lucas’s laboratory (Centre of Forensic Sciences in Toronto, Canada). He then studied towards a PhD degree in the Department of Chemistry, Southern Illinois University (Carbondale, IL), which was awarded in 1976.

Dr. Liu has held positions at the University of Illinois at Chicago (Chicago, IL); US Environmental Protection Agency’s Central Regional Laboratory (Chicago, IL); and US Department of Agriculture’s Eastern Regional Research Center (Philadelphia, PA) and Southern Regional Research Center (New Orleans, LA). He was a faculty member at the University of Alabama at Birmingham (UAB) for 20 years (serving as the director of the University’s Graduate Program in Forensic Science for the last 10 years), retired in 2004, and was granted the "professor emeritus" status in 2005. Following his retirement from UAB, Dr. Liu taught at Fooyin University (Kaohsiung, Taiwan) for eight years (2004– 2012).

Dr. Liu holds professor emeritus status in the Department of Criminal Justice, UAB. He is the editor- in-chief of Forensic Science Review; serves in the editorial boards of several journals; and is ad hoc peer reviewer for many other international journals.