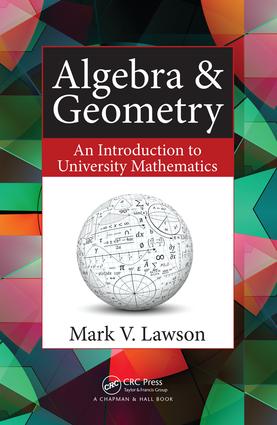 Algebra & Geometry: An Introduction to University Mathematics provides a bridge between high school and undergraduate mathematics courses on algebra and geometry. The author shows students how mathematics is more than a collection of methods by presenting important ideas and their historical origins throughout the text. He incorporates a hands-on approach to proofs and connects algebra and geometry to various applications.

The text focuses on linear equations, polynomial equations, and quadratic forms. The first several chapters cover foundational topics, including the importance of proofs and properties commonly encountered when studying algebra. The remaining chapters form the mathematical core of the book. These chapters explain the solution of different kinds of algebraic equations, the nature of the solutions, and the interplay between geometry and algebra

"This book is for anyone who, having had a taste of higher school mathematics, wants to see what serious math at a university level is truly like. It introduces all the important topics in algebra and algebra as it affects geometry and does so in a totally uncompromised fashion. Professor Lawson shows respect for the subject through the patience exercised in developing the material thoroughly while keeping the reader engaged with a conversational style that never loses clarity. Along the way, there are some real novelties that will surprise even seasoned readers of mathematics."

The Nature of Mathematics

THE SCOPE OF MATHEMATICS

WHAT THEY (PROBABLY) DIDN’T TELL YOU IN SCHOOL

THE RULES OF THE GAME

THE FUNDAMENTAL THEOREM OF ARITHMETIC

THE FUNDAMENTAL THEOREM OF ALGEBRA

THE GEOMETRIC MEANING OF DETERMINANTS

THE ALGEBRAIC MEANING OF DETERMINANTS

Mark V. Lawson is a professor in the Department of Mathematics at Heriot-Watt University. Dr. Lawson has published over 60 papers and has given seminars on his research work both at home and abroad. His research interests focus on algebraic semigroup theory and its applications.