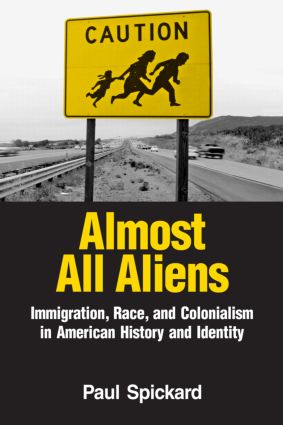 Almost All Aliens offers a unique reinterpretation of immigration in the history of the United States. Leaving behind the traditional melting-pot model of immigrant assimilation, Paul Spickard puts forward a fresh and provocative reconceptualization that embraces the multicultural reality of immigration that has always existed in the United States. His astute study illustrates the complex relationship between ethnic identity and race, slavery, and colonial expansion. Examining not only the lives of those who crossed the Atlantic, but also those who crossed the Pacific, the Caribbean, and the North American Borderlands, Almost All Aliens provides a distinct, inclusive analysis of immigration and identity in the United States from 1600 until the present.

For additional information and classroom resources please visit the Almost All Aliens companion website at www.routledge.com/textbooks/almostallaliens.

"Almost All Aliens is simply stunning. Spickard powerfully connects the study of immigration to the histories of race, slavery, and the displacement of Native peoples. In doing so, he revises both immigration history and American history."

—Erika Lee, author of At America's Gates: Chinese Immigration During the Exclusion Era, 1882-1943

"With Almost All Aliens Paul Spickard again demonstrates that he is one of our most skillful and innovative interpreters of race and ethnicity in American life. He challenges most of the assumptions made about the topic since Crèvecoeur asked his fateful question and provides an exciting analytic narrative of our immigrant past."

"Almost All Aliens is a stunning achievement! By combining the insights of the massive recent literature on immigration, race, and colonialism, Paul Spickard has produced a masterful new narrative of U.S. immigration history for the 21st century. Immensely readable and thoroughly provocative, it will delight students and scholars of immigration alike."

Beyond Ellis Island—How Not to Think about Immigration History

Not Assimilation But Race Making

In the Beginning There Were Indians

There Goes the Neighborhood: European Incursion and “Settlement”

Slavery and Antislavery in the Era of the American Revolution

Were the Irish Ever Not White?

4 The Border Crossed Us: Euro-Americans Take the

From New Sources and Old, to America and Back

Making a Multiethnic Working Class in the West

How They Lived and Worked

Making Jim Crow in the South

Making Racial and Ethnic Hierarchy in the North

Racialist Pseudoscience and Its Offspring

Racial Fairness and the Immigration Act of 1965

8 New Migrants from New Places Since 1965

Some Migrants We Know

9 Redefining Membership Amid Multiplicity Since 1965

New Issues in a New Era

Race, Ethnicity, and Immigration at the Dawn

of the Twenty-First Century

Chronology of Immigration and Naturalization Laws and Decisions

Paul Spickard is Professor of History at the University of California, Santa Barbara. He is co-author of Revealing the Sacred in Asian and Pacific America (Routledge 2003) and editor of Race and Nation: Ethnic Systems in the Modern World (Routledge 2004).