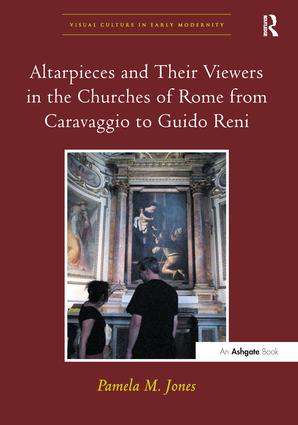 A social history of reception, this study focuses on sacred art and Catholicism in Rome during the late sixteenth and seventeenth centuries. The five altarpieces examined here were painted by artists who are admired today - Caravaggio, Guercino, and Guido Reni - and by the less renowned but once influential Tommaso Laureti and Andrea Commodi. By shifting attention from artistic intentionality to reception, Pamela Jones reintegrates these altarpieces into the urban fabric of early modern Rome, allowing us to see the five paintings anew through the eyes of their original audiences, both women and men, rich and poor, pious and impious. Because Italian churchmen relied, after the Council of Trent, on public altarpieces more than any other type of contemporary painting in their attempts to reform and inspire Catholic society, it is on altarpieces that Pamela Jones centers her inquiry. Through detailed study of evidence in many genres - including not only painting, prints, and art criticism, but also cheap pamphlets, drama, sermons, devotional tracts, rules of religious orders, pilgrimages, rituals, diaries, and letters - Jones shows how various beholders made meaning of the altarpieces in their aesthetic, devotional, social, and charitable dimensions. This study presents early modern Catholicism and its art in an entirely new light by addressing the responses of members of all social classes - not just elites - to art created for the public. It also provides a more accurate view of the range of religious ideas that circulated in early modern Rome by bringing to bear both officially sanctioned religious art and literature and unauthorized but widely disseminated cheap pamphlets and prints that were published without the mandatory religious permission. On this basis, Jones helps to illuminate further the insurmountable problems churchmen faced when attempting to channel the power of sacred art to elicit orthodox responses.

'This is a thought-provoking, stimulating and handsomely-presented book, taking the reader into fascinating fresh paths of inquiry, where Jones will doubtless be followed by many other researchers.’ Renaissance Quarterly

'In the five case studies that comprise this excellent book, Pamela M. Jones eschews grand theories and epistemological pyrotechnics in favor of painstaking research and judicious argument. … Such genuine interdisciplinarity, and the lightness with which Jones wears her learning, make this book important and stimulating reading for specialists, and for any scholar concerned with the relationship of art and society in the early modern period.’ American Historical Review

'In this masterfully documented and sensitively narrated study of five early seicento Roman altarpieces, Pamela Jones has once again demonstrated her broad knowledge and comprehension of the religious culture of early modern Italy… In this book Pamela Jones has presented an exceptionally effective example of how cultural historians should be able to achieve an extremely difficult goal - the assessment of viewers' reception of, appreciation for, and use of religious imagery for contemplative purposes - by examining a far wider range of sources than simply the images and the literature written about them by contemporary conoscenti. It stands as a model for future studies of this scope, be they focused on Counter-Reformation Italy or any other period of religious art and architecture.' Church History

Contents: Introduction; The triumph of chastity and justice in Christian Rome: Tommaso Laureti's Martyrdom of Saint Susanna (ca 1595-97) in the church of S. Susanna; The place of poverty in Seicento Rome: bare feet, humility, and the pilgrimage of life in Caravaggio's Madonna of Loreto (ca 1605-06) in the church of S. Agostino; Serving the poor sick with humility from the lazzaretto of Milan to the hospitals of Rome: Andrea Commodi's S. Carlo Borromeo Venerating the Holy Nail (ca 1621-22) in the church of S. Carlo ai Catinari; From sin to salvation: Guercino's Penitent Magdalene (ca 1622) for the church of S. Maria Maddalena delle Convertite al Corso and the fight against prostitution; Leading pilgrims to paradise: Guido Reni's Holy Trinity (1625-26) in the church of SS. TrinitÃ  dei Pellegrini e Convalescenti and the care of bodies and souls; Conclusion; Bibliography; Index.

Pamela M. Jones is Professor of Art History at the University of Massachusetts Boston, USA. She is the author of Federico Borromeo and the Ambrosiana and a co-curator of the exhibition Hope and Healing: Painting in Italy in a Time of Plague.