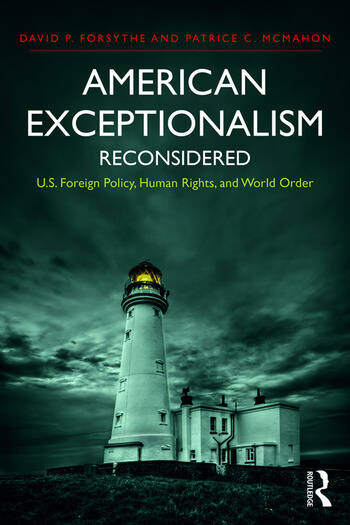 Is the US really exceptional in terms of its willingness to take universal human rights seriously? According to the rhetoric of American political leaders, the United States has a unique and lasting commitment to human rights principles and to a liberal world order centered on rule of law and human dignity. But when push comes to shove—most recently in Libya and Syria--the United States failed to stop atrocities and dithered as disorder spread in both places. This book takes on the myths surrounding US foreign policy and the future of world order. Weighing impulses toward parochial nationalism against the ideal of cosmopolitan internationalism, the authors posit that what may be emerging is a new brand of American globalism, or a foreign policy that gives primacy to national self-interest but does so with considerable interest in and genuine attention to universal human rights and a willingness to suffer and pay for those outside its borders—at least on occasion. The occasions of exception—such as Libya and Syria—provide case studies for critical analysis and allow the authors to look to emerging dominant powers, especially China, for indicators of new challenges to the commitment to universal human rights and humanitarian affairs in the context of the ongoing clash between liberalism and realism.

The book is guided by four central questions: 1) What is the relationship between cosmopolitan international standards and narrow national self-interest in US policy on human rights and humanitarian affairs? 2) What is the role of American public opinion and does it play any significant role in shaping US policy in this dialectical clash? 3) Beyond public opinion, what other factors account for the shifting interplay of liberal and realist inclinations in Washington policy making? 4) In the 21st century and as global power shifts, what are the current views and policies of other countries when it comes to the application of human rights and humanitarian affairs?

Introduction: The Quest for a Liberalized Realism?

1. City on a Hill?: American Exceptionalism Past and Present

3. Saving Strangers: Humanitarian Intervention and the Responsibility to Protect (R2P)

4. US Detention and Interrogation Policies after 9/11/2001: A Tortured Evolution

5. American Exceptionalism Reined In: The US Supreme Court, Corporations, and the Kiobel Case

6. Hard Times for Human Rights: The Role of Aspiring Powers

David P. Forsythe is Professor Emeritus of Political Science at the University of Nebraska–Lincoln.

is Associate Professor of Political Science at the University of Nebraska–Lincoln.

"From the first page until the last, American Exceptionalism Reconsidered will grab the reader’s attention. I hope that David Forsythe and Patrice McMahon are correct that the pursuit of U.S. national interests can still be blended with attention to universal human rights and even an occasional commitment to come to the rescue of those outside its borders."

Graduate Center of the City University of New York

"Forsythe and McMahon have written an exceptional book on American exceptionalism. Against the broad canvas of American history but with a focus on events since 9/11, this intelligent and wide-ranging book shows quite convincingly what no politician would ever acknowledge: that the U.S. is no better than any other country. Those seeking an antidote to ‘make America great again’ will certainly find it here."

"This fresh analysis of a recurring central theme in U.S. policy brings important insight to bear on the fate of human rights in a post-hegemonic world. Forsythe and McMahon's rigorous analysis of the U.S. record builds the case for a more nuanced ‘American globalism’ that advances academic understanding and strategies for human rights advocacy."

"The U.S. does not have a unique interest in promoting the good abroad; it is a normal country blending self-interest with internationalism, nationalism with cosmopolitanism. Forsythe and McMahon expertly make this case by analyzing history, policy, and law pertaining to issues like humanitarian intervention, torture, and corporate regulation. This excellent, readable, and current classroom text is enlivened by frequent reference to American public opinion and comparison with other large countries’ foreign policies."

"This book, a searing but thoughtful indictment of the myth of American exceptionalism, is an indispensable analysis of a self-identified 'indispensable' country. It exposes double standards in U.S. foreign policy when it comes to the protection of human rights, while also recognizing that hypocrisy is not reserved just for the U.S. This excellent book raises profound questions about the ability of human rights law to affect state behavior, with sometimes-uncomfortable conclusions. It notes the paradox that U.S. power has been central to both attempts to protect human rights and failure to do so."

"All those concerned with human rights—as scholars or activists—need to understand the causes and consequences of U.S. foreign policy. Forsythe and McMahon provide us with an admirably clear and judiciously balanced account of the history, present state, and likely future of the U.S. approach to international human rights. Their nuanced analysis blows away a number of myths that cloud this important subject."

"For frustrated human rights advocates ‘American exceptionalism’ is about the U.S. government’s tendency to eschew certain international norms, including human rights. For some patriots, however, it refers to the notion of the U.S. as a sui generis flagship of democracy and human rights. This informative book examines and successfully falsifies the latter view with a thorough study of four major issue areas. Forsythe and McMahon show that the American public, too, has preferred a self-serving foreign policy. Raising controversial questions for all U.S. citizens, this important book will facilitate teaching and learning in classrooms and beyond."