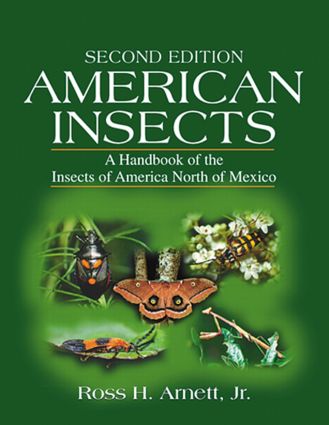 A Handbook of the Insects of America North of Mexico, Second Edition, 2nd Edition

Offering a complete accounting of the insects of North America, this handbook is an up-dated edition of the first handbook ever compiled in the history of American entomology.

By using American Insects, A Handbook of the Insects of America North of Mexico, Second Edition, readers can quickly determine the taxonomic position of any species, genus, or higher taxon of insect known to occur in America and Canada. Every order, family, and genus is conveniently numbered and indexed, making this volume the only complete single source for all of the names of orders, families, and genera currently available.

This book fills the need for an accurate way to identify, with the several hundred drawings and photos, the common insects of all orders. Now there is a tool available to those working without a major collection and library; and those who would like to have a general knowledge of insect life without becoming overwhelmed by the vast number of minute insect species.

This usable guide provides sizes, shapes, color patterns and salient features of some species of each major family by pointing out those groups most likely to be encountered, including all North America pests.

What's New in this Edition?

"Any biologist with a passing interest in insects, any student looking for a pen-and-ink drawing of a particular beetle, or any reference librarian checking out a common name for an insect will find a use for this volume. This new edition gathers together as much as anyone needs to gain entry into the vast entomological literature. This book is a tribute to Arnett's single-minded devotion, over the course of 80 years, to the study of insects…According to the author, there are 87,107 different types of insects in North America, all of which are accounted for in this book."

"Fifteen years after the first edition, which was the first such handbook to be compiled in American entomology, the second edition of R.H. Arnett, Jr.'s massive tome has been revamped and improved with: captions…restored for what now are the more than 1,500 photos and line drawings; cladistics used to determine relationships; bibliographic entries expanded and updated; and, many identification keys revised for uniformity…every order, family, and genus is numbered and indexed making the landmark work a convenient tool for identifying insects and determining taxonomic position…broadly useful to areas other than the specified geographic region."

The Orders of Insects

The Insect Fauna of America, North of Mexico