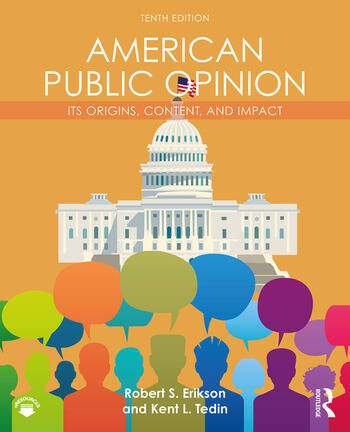 Providing an in-depth analysis of public opinion, including its origins in political socialization, its role in the electoral process, and the impact of the media, American Public Opinion goes beyond a simple presentation of data to include a critical analysis of the role of public opinion in American democracy.

New to the Tenth Edition

3. Microlevel Opinion: The Psychology of Opinion-Holding

8. The News Media and Political Opinions

9. Elections as Instruments of Popular Control

10. The Public and Its Elected Leaders

11. Public Opinion and the Performance of Democracy

is Professor of Political Science at the University of Houston. He served as department chair from 1984 to 2002 and 2017 to 2018. He has written extensively on political socialization, notably the influence of families and peers on the filial generation. He has also written a number articles on schools and public opinion, including how charter schools affect the social capital of parents, as well as how race and academic quality attributed to character school affect parent choice. Recently, he has written on family socialization in a polarized era. He has published articles in every major political science journal, including the American Political Science Review, the American Journal of Political Science, the Journal of Politics, and Public Opinion Quarterly, among others.