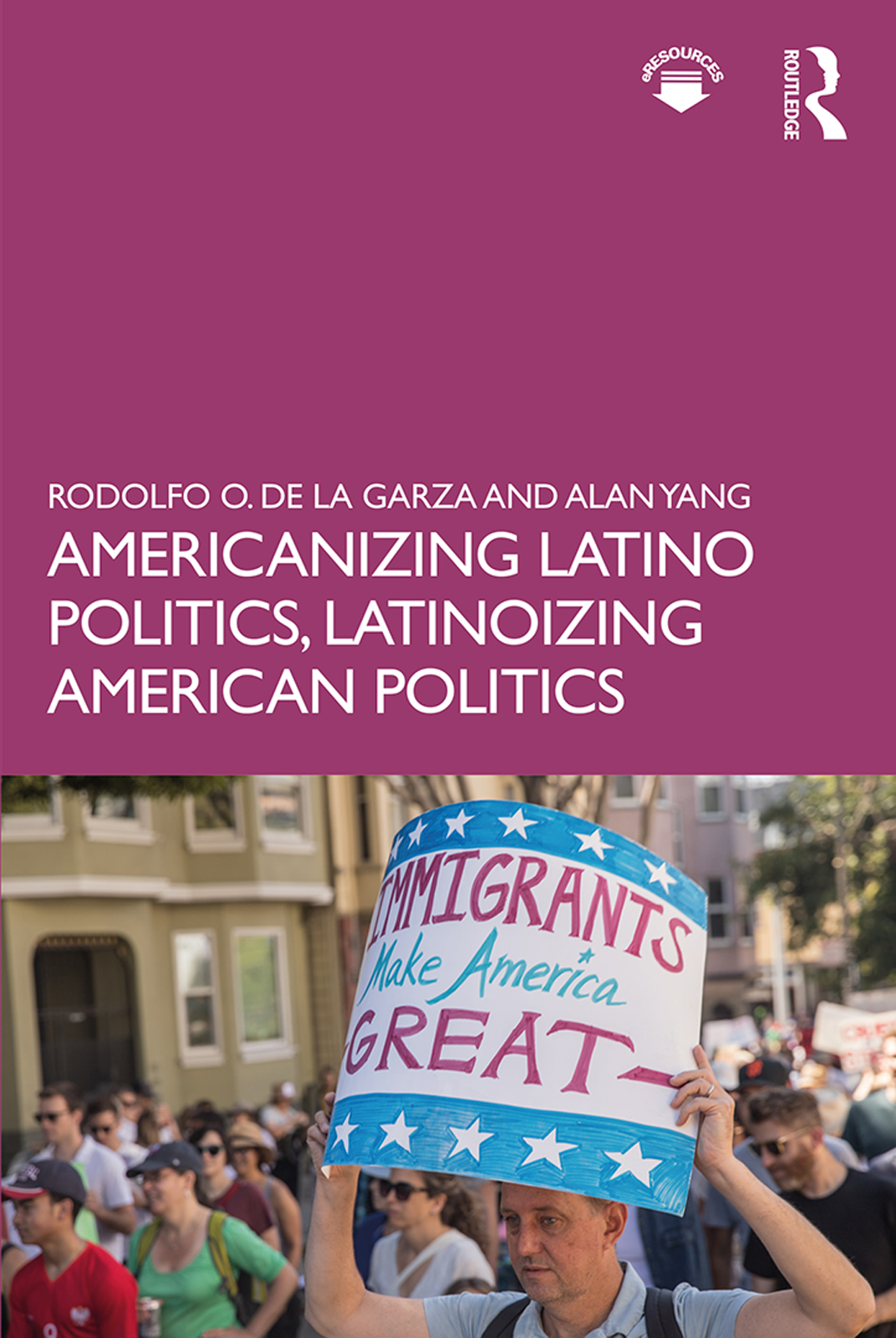 Using the most extensive and currently available survey opinion data, this book empirically supports the argument that Latinos have emerged as a convergent panethnic political group, beyond the individual national origin identities dating to the time of the 1990 Latino National Political Survey when Mexican Americans, Puerto Ricans, and Cuban Americans were treated conceptually as politically distinct groups. Replete with data and supplemented by an extensive online resource, this book offers scholars, students, and sophisticated general readers evidence and inspiration for understanding the dynamics of Latino politics in the U.S. today.

"Americanizing Latino Politics, Latinoizing American Politics offers a methodologically rich and institutionally grounded study of Latino political behavior through the period in which survey data can be tapped to understand Latino political attitudes and behaviors. Rudy de la Garza and Alan Yang are uniquely positioned to undertake this study. Professor de la Garza led the team that collected the first nationally representative sample of Latino political values, attitudes, and behaviors. In the years since that first study, the Latino National Political Survey, he helped shape subsequent national and regional Latino and immigrant surveys; he was ever attentive to patterns in the Latino political attitudes and behaviors that reflected continuity and change. Americanizing Latino Politics, Latinoizing American Politics documents the bridging of Latino national origin identities in the 1990s and early 2000s into a relatively cohesive and self-aware Latino panethnic political identity.

The volume offers a rich analysis of the institutional and demographic factors that shaped the emergence of Latino political identity in the post-civil rights era. This analysis is critical to understanding the Latino political story, but also offers a model to better understanding the process of political identity building in other contemporary racial/ethnic/immigrant communities in the United States. This rich institutional and demographic foundation serves as a platform for the volume’s empirical analysis of the twin-edged process of the increasing cohesion of Latino political attitudes and partisan attachments, regardless of national origin or ancestry, and the increasing Latinoization of U.S. politics.

For de la Garza and Yang, this is process of the formation of a Latino political ethnicity rests on a broad process of Americanization among Latinos, with the recognition that Latinos have in the period under study changed what it means to be American. Through this analysis, the authors offer a new, more contemporary model of immigrant/ethnic Americanization that places political identity and political influence at the core of political identity building.

Americanizing Latino Politics, Latinoizing American Politics concludes with perhaps its most challenging task, to assess the impact of the Trump presidency, or at least its first 18 months, on the shape of Latino political ethnicity. Here, they find that President Trump’s role as a disrupter has extended to at least a part to disrupt the emerging Latino political cohesion that de la Garza and Yang had documented in the twenty years preceding the Trump presidency. While Latinos, not surprisingly considering Trump’s demonization of the Latino experience, are united in their disapproval of his administration’s policies and the direction of the country, de la Garza and Yang do find some newly emergent divisions among Latinos over immigration-related policies." – Louis DeSipio, University of California--Irvine

"De la Garza and Yang provide the most persuasive analysis to date showing that a panethnic Latino public opinion and politics has emerged from Mexican-American, Puerto Rican, Cuban, and other Hispanic groups, once regarded as fully distinct. Updating statistical results beginning with the findings from the 1990 Latino Political Survey (LNPS), that de al Garza pioneered, with a systematic and impressive social scientific analysis of later surveys from 2002 to 2018, the authors show that while some important and interesting group-specific differences remain, the policy preferences and other political opinions of these ethnic groups have substantially converged. De la Garza and Yang make a compelling and provocative case that this relatively unified panethnic political group has emerged as a consequence of the process of Americanization -- which they define and measure -- that Latinos experienced during the last three decades. We will want to see how this identity politics plays out in the 2020 elections and the years ahead." – Robert Y. Shapiro, Columbia University

"This book demonstrates that the Latino vote is more than just an episodic expression of partisan preferences. In this era of increasing social divisions and political polarization it is refreshing to see evidence that shows that community can be the result of politics. Not a community where singular differences are erased but one where disparate national origins converge in political orientations and behavior that affirm an identity that reinforces both a sense of belonging and a sense of plurality. Here the idea of E Pluribus Unum comes to full life; most importantly, the book shows that this is a historically contingent process. This is one more piece of the puzzle that shows how through politics Latinos contribute dynamically and distinctively to the making of our nation." – José E. Cruz, University at Albany, State University of New York

"Only the most ambitious among us can ask and answer how and why U.S. Latinos have converged politically over time. De la Garza and Yang have accomplished the feat with the highest order of insight, precision, and verve." – Jane Junn, University of Southern California

"This superb empirical mapping of the development and institutionalization of what the authors call political ethnicity has implications well beyond the book’s rich account of political dispositions and behavior among Americans with Mexican, Puerto Rican, and Cuban roots. For what it offers is an account of mechanisms that mutually shape experiences, identities, and patterns of political expression." – Ira Katznelson, Columbia University

"For decades, scholars used terms such as ‘Latinos’ and studied dynamics such as ‘the Latino vote’ without being entirely confident that they existed. This essential new book analyzes surveys across three decades and finds that ‘there is a there, there.’ Latinos from different national-origin groups are converging over time in terms of political behaviors and opinions – in other words, de la Garza and Yang show that Latinos in theory are becoming Latinos in reality. This conclusion has crucial implications for government, academia, thinks tanks, and activists who are trying to make sense of this large and complex community. The book also demonstrates how the creation of a Latino politics is an American dynamic, closely connected with changes across the generations. Latinos are moving to the mainstream while retaining some unique perspectives. Three decades ago, de la Garza wrote that Mexican Americans were ‘as American as tamale pie,’ and now he shows that this applies to Latinos generally. This is a timely point in light of how some in politics have lost confidence in Americanization and claim that Latinos resist acculturation. Finally, the book cements Rudy’s legacy as a creative, questioning, and undaunted scholar. His career began by spearheading the political science study of Latinos, and it concludes by showing that a Latino politics now exists as well as how it came to exist." – David L. Leal, University of Texas at Austin

Chapter 3 The Development of Latino Ethnicity

Chapter 6 The Americanization of Latino Political Behavior and Policy Preferences

Rodolfo O. de la Garza was, until his death, Eaton Professor of Administrative Law and Municipal Science, and Professor of International Public Affairs, at Columbia University.

Alan Yang is Senior Lecturer in the Discipline of International and Public Affairs at Columbia University.