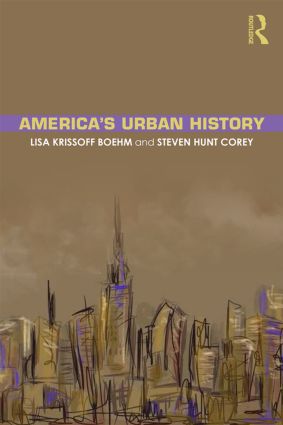 The history of the American city is, in many ways, the history of the United States. Although rural traditions have also left their impact on the country, cities and urban living have been vital components of America for centuries, and an understanding of the urban experience is essential to comprehending America’s past. America’s Urban History is an engaging and accessible overview of the life of American cities, from Native American settlements before the arrival of Europeans to the present-day landscape of suburban sprawl, urban renewal, and a heavily urbanized population.

The book provides readers with a rich chronological and thematic narrative, covering themes including:

Covering the evolving story of the American city with depth and insight, America's Urban History will be the first stop for all those seeking to explore the American urban experience.

Historians of working-class women, Boehm and Corey offer a strongly interdisciplinary approach to US urban history…The volume is strong on race, ethnicity, suburbanization, and deindustrialization. Tailored to college and university undergraduates, the text is especially appropriate for urban history collections with an interdisciplinary focus. Summing Up: Highly recommended. All academic levels/libraries.

America's Urban History is a comprehensive and beautifully written text that effectively incorporates all regions of the country into a synthesis of America's urban past. This is a thoroughly researched and timely book that is essential reading for anyone interested in urban America.

One of the best features of America’s Urban History is its coverage. The text is particularly unique and useful on the front end by discussing the pre-Columbian era, and on the back end, by moving into the 21st century. Attention to the American West also is welcome. Boehm and Corey obviously have given a great deal of thought to their presentation.

—Martin V. Melosi, author of The Sanitary City: Urban Infrastructure in America from Colonial Times to the Present

In this volume Boehm and Corey apply their ample experience in the teaching and study of urban America to the task of achieving a much-needed understanding of the metropolitan world which surrounds us. Through their efforts students should be able to comprehend the American metropolis and acquire insight into the urban environment which has molded us and which we will fashion in the future.

—Jon C. Teaford, author of The Metropolitan Revolution: The Rise of Post-Urban America

Introduction: Discovering and Defining the "City upon a Hill"

Chapter Five: The Urban Cauldron: City Growth and the Rise of Social Reform, 1850-1920

Chapter Nine: The Frontier of Imagination: American Cities in the 1960s

Steven H. Corey is Professor and Chair of the Department of Humanities, History, and Social Sciences at Columbia College Chicago.

Together, they are the editors of The American Urban Reader, an anthology of primary and secondary sources in American urban history.