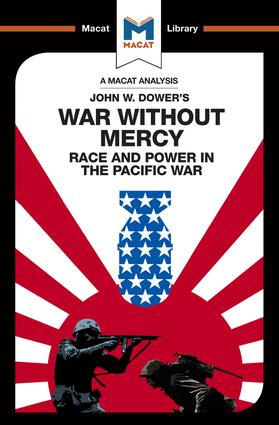 An Analysis of John W. Dower's War Without Mercy

Race And Power In The Pacific War, 1st Edition

John Dower’s War Without Mercy is an attempt to resolve the problem of why the United States fought World War II so very differently in the Pacific and European theaters. Specifically, the author sets out to explain why there was such vicious hostility between the US and Japan during the conflict. This was not merely a matter of outrage at Pearl Harbor, and understanding the phenomenon required going beyond the usual strategic, diplomatic and operational records that fuel most histories of war. Dower looked instead for alternate possibilities – and found them.

His book argues that the viciousness that marked fighting in the Pacific had deep roots in popular culture which created frightening racial stereotypes of the enemy on both sides of the ocean. Dower's focus on ‘low culture’ proved to be a useful way of generating alternative possibilities to mainstream thinking about US-Japanese relations. The thinking underpinning the book was innovative, and was challenged by some peers who failed to recognise how profoundly revealing material such as cartoons and cheap magazines could be. But the result was one of the most significant studies of 20th-century history yet written – one that yields a strong, well-reasoned and persuasive solution to the problem posed.

Who was John W. Dower?

What does War Without Mercy: Race And Power In The Pacific War Say?

Why does War Without Mercy: Race And Power In The Pacific War Matter?

Vincent Sanchez holds a masters degree in modern History from the University of Chicago.