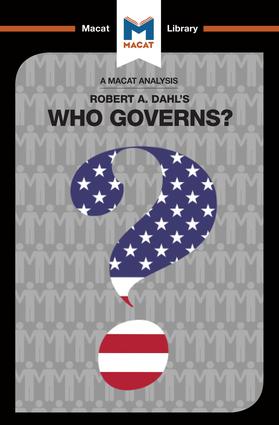 An Analysis of Robert A. Dahl's Who Governs? Democracy and Power in an American City

American political theorist Robert Dahl’s 1961 work of political theory exhibits deep levels of creative thinking. When Dahl wrote, the American system of liberal democracy was generally considered to be shaped by a small group of powerful individuals who dominate because they are wealthy and influential. But by connecting the evidence in a new way in Who Governs? Dahl argued convincingly against this view.

Dahl suggested that power is actually distributed among a number of competing groups, and that each of those groups seeks to influence decisions. He puts forward a definition of political power as the ability to make others do what you want them to, concluding that – while most people do not actively participate in politics and so do not exert a direct influence – power is still fragmented, and citizens do indirectly shape decision-making.

Dahl’s novel explanation of the existing evidence emerged from a study of three areas of policy-making in the city of New Haven: political nominations, urban redevelopment, and public education. His research revealed that different people wielded power in each area, and that only the mayor, whose power is checked by those who vote for him, was powerful in all three. These new connections allowed Dahl to arrive at fresh conclusions and convincingly demonstrated that the US operates a pluralist system in which power is divided between different interest groups.

Who was Robert Dahl?

What does Who Governs? Say?

Why does Who Governs? Matter?

Dr Astrid Noren Nilsson holds a doctorate in politics and international studies from the University of Cambridge. She currently teaches at the University of Lund in Sweden, and is the author of the monograph Cambodia’s Second Kingdom: Nation, Imagination, and Democracy (Cornell SEAP, 2016). Her research interests include democratic change, nationalism, the politics of memory, and emerging notions of citizenship and social change in South-East Asia.