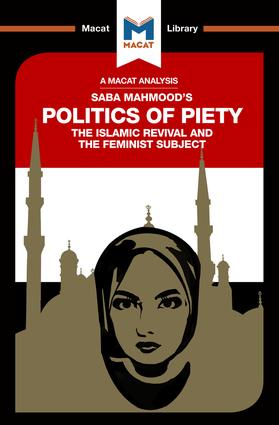 An Analysis of Saba Mahmood's Politics of Piety

The Islamic Revival and the Feminist Subject, 1st Edition

Saba Mahmood’s 2005 Politics of Piety is an excellent example of evaluation in action.

Mahmood’s book is a study of women’s participation in the Islamic revival across the Middle East. Mahmood – a feminist social anthropologist with left-wing, secular political values – wanted to understand why women should become such active participants in a movement that seemingly promoted their subjugation. As Mahmood observed, women’s active participation in the conservative Islamic revival presented (and presents) a difficult question for Western feminists: how to balance cultural sensitivity and promotion of religious freedom and pluralism with the feminist project of women’s liberation? Mahmood’s response was to conduct a detailed evaluation of the arguments made by both sides, examining, in particular, the reasoning of female Muslims themselves. In a key moment of evaluation, Mahmood suggests that Western feminist notions of agency are inadequate to arguments about female Muslim piety. Where Western feminists often restrict definitions of women’s agency to acts that undermine the normal, male-dominated order of things, Mahmood suggests, instead, that agency can encompass female acts that uphold apparently patriarchal values.

Ultimately the Western feminist framework is, in her evaluation, inadequate and insufficient for discussing women’s groups in the Islamic revival.

Who is Saba Mahmood

What does The Politics of Piety Say?

Why does The Politics of Piety Matter?

Dr Ian Fairweather is lecturer in social anthropology at the University of Manchester. His research focuses on religious behavior and on the ways in which contemporary postcolonial identity strategies are articulated performatively.