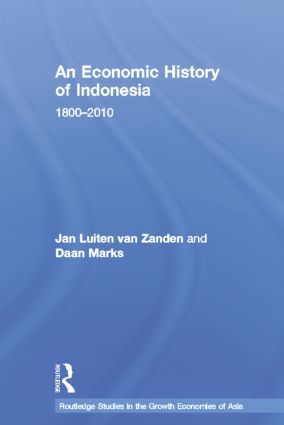 An Economic History of Indonesia

Based on new datasets, this book presents an economic history of Indonesia. It analyses the causes of stagnation of growth during the colonial and independence period, making use of new theoretical insights from institutional economics and new growth theory.

The book looks at the major themes of Indonesian history: colonial exploitation and the successes and limitations of the post 1900 welfare policies, the price of instability after 1945, and the economic miracle after 1967. The book not only discusses economic change and development – or the lack thereof – but also the institutional and socio-political structures that were behind these changes. It also presents a lot of new data on the changing welfare of the Indonesian population, on income distribution, and on the functioning of markets for rice, credit and labour. Concluding with a discussion on whether the poor profited from the economic changes, this book is a useful contribution to Southeast Asian Studies and International Economics.

"A valuable piece of academic work that will become a great contribution to the field of economic history in Indonesia. It is well written and organized chronologically, covering seven historical episodes of the country's economic development. The book is obviously a useful reference for readers who are interested in obtaining insights into the nature of long-term economic growth." - Siwage Dharma Negara; Journal of Southeast Asian Economics, Vol. 30, No. 1, April 2013.

'The book’s real appeal lies in the detail it provides of these propositions for the Indonesian case, its explanation and assessment of the political economy that determined the corresponding policy settings, and its attention to how the proceeds of growth were distributed in each major phase of the development story.' - Glenn Withers, ANU; Bulletin of Indonesian Economic Studies, Vol. 49, No. 2, 2013.

Jan Luiten van Zanden is Professor of Global Economic History at Utrecht University, the Netherlands. He has published widely about processes of long-term economic development in Europe and Asia.

Daan Marks obtained his PhD in economics at Utrecht University, the Netherlands. He is currently working as a senior economist at the Dutch Ministry of Finance.